Chapter 1 of the Undead Campaign, Act III "Legacy of the Damned" in Warcraft III: The Frozen Throne.

At the capital city of Lordaeron, near the ruined Palace Gardens, Archimonde's pet dreadlords discuss their current plans for the Scourge.

After forcing the three Dreardlords to flee Arthas splits the Scourge into three serves with himself, Kel'Thuzad and Sylvanas to command a different portion of the Scourge in order to wipe out the last remnants of Alliance forces within his Kingdom. At the same time the Alliance forces are trying to flee towards to the safety of the mountains, as such the Scourge is tasked with not only destroying all Alliance forces in the order but guarding the exits to the mountains to ensure that no one escapes their wrath. While dealing with the Alliance (which includes Silver Hand remnants) Arthas is mysteriously struck by pain and weakened. While Kel'thuzad is concerned and asked if they should halt their operations, Arthas demands the Scourge continue since the pain has passed. Eventually the Scourge is successful in wiping out their enemies, but Arthas is immediately commanded by the Lich King to come to Northrend at once as danger is drawing near the Frozen Throne.

There are several bands of Human refugees attempting to escape to the recently captured city of Dalaran. Rout them and burn down their pathetic villages and encampments to show them the folly of trying to escape Arthas' wrath.

The Paladin order has emerged again from the rubble of the Lordaeron Empire. Destroy the Altars of the three Paladins that have set up camps here. 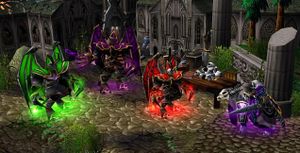 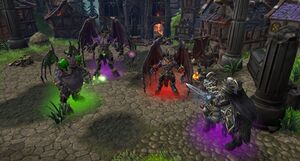 Detheroc: It's been months since we last heard from Lord Archimonde. I grow tired of watching over these rotting undead! What are we still doing here?

Balnazzar: We were charged with overseeing this land, Detheroc. It is our duty to remain here and ensure that the Scourge is ready for action.

Varimathras: True. Though we should have received some kind of orders by now.

Sylvanas Windrunner: The Legion was defeated months ago. How could they not know?

Kel'Thuzad: Impossible to say. But the longer they remain in command, the more they run the Scourge into the ground.
Something begins banging on the gate.

Sylvanas Windrunner: What? Who could possibly...
Arthas knocks the gate down.

King Arthas: Greetings, dreadlords. I should thank you for looking after my kingdom during my absence. However, I won't be requiring your services any longer.

Balnazzar: This land is ours. The Scourge belongs to the Legion!

King Arthas: Not anymore, demon. Your masters have been defeated. The Legion is undone. Your deaths will complete the circle.

Kel'Thuzad: We knew you would return to us, Prince Arthas.

King Arthas: I have returned, lich, but you will now address me as King. This is, after all, my land.

King Arthas: Now, we must secure the kingdom by scouring the last remnants of humanity from it!

Kel'Thuzad: But, my king, the humans have begun to abandon their villages.

Kel'Thuzad: They're fleeing to the canyon passes! If they escape into the mountains, it will be impossible to hunt them all down.

King Arthas: Then we must slaughter them before they escape! Their deaths will be a fitting tribute to Ner'zhul!

King Arthas: Aarrghh... The pain is unbearable. What is happening to me?

The Lich King: Danger draws near! Power is fading. Time is running out!

King Arthas: No. The pain has passed, but my powers are diminished. Something is terribly wrong here.

Kel'Thuzad: Shall we recall our forces?

King Arthas: No. I will finish the hunt. We'll solve this mystery once our business is done.

Halahk the Lifebringer: Arthas, you wear your father's crown as if you earned it. You may kill me, but my brethren will never stop hounding you!

King Arthas: I can't believe that any of you survived the first purge. No matter. After today, your self-righteous order will cease to exist.

Kel'Thuzad: King Arthas, the humans have made it through the pass. Now there's no way to stop them from reaching sanctuary.

King Arthas: Then we've failed, lich. Return to the capital. Someone will pay dearly for this!

King Arthas: At last, the Alliance is finished! Once we round up the last stragglers, we should be--

The Lich King: It is I, the Lich King. Danger draws near the Frozen Throne! You must return to Northrend immediately! Obey!

Kel'Thuzad: My king, you are not well.

King Arthas: Take me back to the capital. I have a long journey ahead of me. 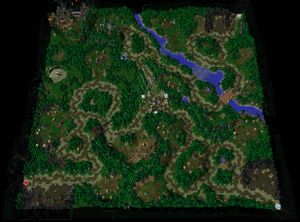