King Dred is an optional devilsaur boss in Drak'Tharon Keep, found in the Raptor Pens. Kurzel refers to him as a "raptor king" and says that he is immune to the Plague of Undeath.[1]

King Dred is a legend amongst the Drakkari. Stories tell of a troll hunting party locating a mighty beast that thrived in a habitat saturated with Scourge plague. The trolls tamed the devilsaur, believing that he alone held an antidote for the savage disease devastating their people. 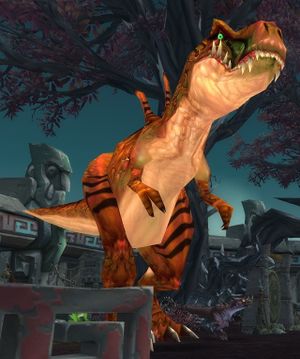 King Dred in World of Warcraft.

This is an easy tank and spank fight. The healer needs to be careful of Grievous Bite. Lay on Hands is an excellent way to remove the debuff. The armor debuff combined with heavy bleed damage can be stressful on the healer. Another important factor is to either pull the adds before King Dred or to dps them once they are called by Raptor Call.

Bellowing Roar is a 35 yard range which enables healers to out range the fear altogether. Shamans can use Tremor Totem, Priests can use Fear Ward to help the tank from moving. Warrior tanks can use Berserker Rage to break the fear, and Feral druids that have specced that far can use

[Berserk]. Having the healer stand at maximum range from the tank (with the tank facing the mob towards the healer) will ensure the healer never gets feared.

An alternative tactic is to have a heavy-armor dpser taunt King Dred when he emotes "King Dred raises his claws menacingly", indicating that he is about to cast his three strikes in quick succession. Often a plate-wearer (or druid in bear form) can survive these attacks so long as the boss is quickly taunted back off of them. This will spread out the damage and greatly reduce the effect of the armor reduction debuff from Piercing Slash.

He drops King Dred's Tooth for