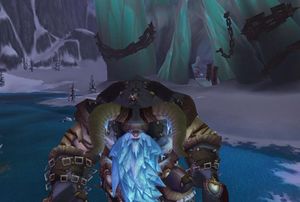 King Jokkum taking a gnome on a tour of the Thunderfall.

King Jokkum is the lord of the frost giants and the leader of the Sons of Hodir. He resides in the Sons' home base of Dun Niffelem in the Storm Peaks, along with his frostworg companion, Oloh.

Jokkum's father, Arngrim the Insatiable, had been King of the frost giants when Thorim, once their greatest ally, suddenly turned on them. The Stormlord had been tricked by his brother, Loken, into thinking that the frost giants were responsible for the death of Thorim's wife Sif. Many long years later, when Thorim was roused from his stupor by players, the Stormlord decided to set things right and restore his friendship with the frost giants. Over the course of several quests, Jokkum and his brethren aid the player in restoring Thorim's armor and weapon to him, and ultimately sends them on their final showdown with Loken in Ulduar's Halls of Lightning.

Please add any available information to this section.
You are permitted to visit our stronghold, little <race>.

Do not bring us dishonor!

If it please you, King Jokkum, may I know what has become of Krolmir?