This article is about the character biography. For his tactics in Operation: Mechagon, see King Mechagon (tactics). For other uses, see Mechagon (disambiguation).

King Mechagon is the ruler of the ancient lost city of Mechagon. He was the last king of the gnomes who went in search of a mysterious land of technology. He left no clues where he was headed and over time his legend faded into history[1] until the discovery of the Forgotten Vault in Kul Tiras.

He has a vision to return anyone of flesh into more pure robotic parts and it will be up to champions to put a stop on his plans.[2] Piloting a giant death robot, Mechagon serves as the final boss of Operation: Mechagon.[3]

King Mechagon was the last king of the gnomes, who 400 years ago[4] led his followers in search of a mystical land of technology.[1] He established a new kingdom on Mechagon Island, named eponymously after himself, and built a new gnomish society, the mechagnomes, named for their mechanical forebears.

Stories related years later to the adventurer hint that even then, he was a ruler of questionable sanity. According to Vera Lonelycog, the seventh proclamation he made as king (as in, a law he made within days of being crowned) was to outlaw any non-mechanical creature smaller than an infant. He then had his soldiers arrest anything that fit that description, including rabbits, squirrels, and even fish, then put them on trial, having most of them mechanized, exiled, or executed.[5]

When the elderly gnome explorer Kervo crashlanded on Mechagon Island, he was found by Mechagon and a group of mechagnomes. The mechagnomes were shocked at the sight of Kervo's wrinkly skin, with Mechagon explaining that it was what happened when mortals grew old. The king ordered his subjects to bring the outsider into Mechagon City. When Kervo woke up, Mechagon brought him on a tour of the city, explaining that the people of Mechagon were reverting the Curse of Flesh in order to become flawless like their mechagnome ancestors. The king showed Kervo how the mechanization process worked. When Kervo pointed out that the procedure looked and sounded like torture, the king replied that the pain of mechanization was only temporary compared to the constant, inescapable pain of aging and death.

Kervo was later approached by Mechagon's son Erazmin, who urged him to leave the city and warn his people about a device Mechagon planned to use to forcibly remove the Curse of Flesh from all organic life on Azeroth. However, Kervo decided he couldn't leave the city empty-handed and went to the king to inform him of his son's treachery. As a reward, Mechagon brought Kervo to the device Erazmin had shown him earlier, explaining that its process would be instant as opposed to the years-long mechanization process normally used. While he had never used the device on his own people before, Mechagon argued that they hadn't earned it like Kervo had.

When the device was activated, Kervo was instantly transformed into a mindless completely mechanical being, unable to do anything except repeat the words "Found it" over and over again. One of the technicians noted that there seemed to be some damage, and Mechagon told him to make adjustments to the device so it wouldn't malfunction when used on the entire world. As for Kervo, Mechagon was of the opinion that he had gotten what he wanted, and all the time in the world to enjoy it.[6] 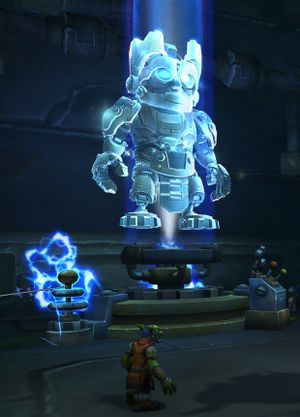 Tinkmaster Overspark manages to gain entry into the Forgotten Vault within the Abandoned Junkheap in Tiragarde Sound, activating an image projector with a message from King Mechagon, who promises to "cure" the Curse of Flesh and invites the listeners in the vault to his island. However. "incompatable" presences are detected within, and the non-gnomish members of Overspark's team are vaporized. When the beam prepares to do the same to Overspark's assistant, Gila Crosswires, it spares her, and produces the coordinates for Mechagon Island.[7] Shortly after Overspark leaves to lead his expedition to Mechagon, Gazlowe and his Greasemonkeys arrive, having followed Overspark; Gazlowe finds the same message, and loses several of his crew to the vault's defenses before he brings the lone Archaeo-Tinkologist his crew spared into the beam. As with Gila, the detection of a gnome in the vault deactivates the defenses and gives them the coordinates as well.[8]

Overspark and Gazlowe both arrive in Rustbolt and meet with Prince Erazmin, who leads the resistance against his father's rule. Motivated by his hatred for all organic life, Mechagon's plan is to use his mechoriginator, the device he used to "decurse" Kervo, to forcibly "cure" the Curse of Flesh and mechanize all life on Azeroth.[9][10]

In a future alternate timeline, King Mechagon won and activated the Mechoriginator, but it did not work the way he planned. It instead ignited a global firestorm and killed everyone without mechanical augmentations.[11][12]