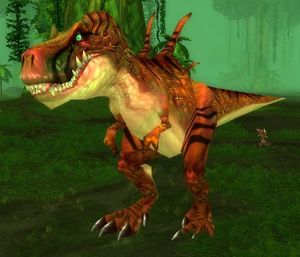 Mosh in World of Warcraft.

King Mosh is a level 60 rare devilsaur that frequents the northwestern area of Un'Goro Crater, between the river and the large lakes.

Once, Mosh attacked Kova Broadhorn and Miles Corebender. He stunned Miles for a short time before being attacked by Kova, whom he almost killed before Miles injured the devilsaur's leg and stunned him.[1]

Mosh appears as a legendary card for the Warrior class in the Journey to Un'Goro expansion for Hearthstone.