King Mrgl-Mrgl is a night elven agent of the D.E.H.T.A. always found wearing a

[Murloc Costume]. He has a particular interest in observing and preserving murloc populations, reluctantly assuming leadership of the displaced Winterfin tribe in Borean Tundra and later leading efforts to raise a friendly young murloc named Murky to be the new leader of the violent and cruel Swamprock tribe of Shipwreck Cove in Highmountain.

Mrgl-Mrgl's first appearance is at the Winterfin Retreat in the Borean Tundra. He originally came to the area to observe the Winterfin murlocs, keeping his distance and taking notes on their day-to-day life. However, when a makrura named Claximus emerged from the Winterfin's home caverns and used his magic to take control of most of the tribe, the unaffected survivors retreated to across the strait and named the reluctant Mrgl-Mrgl as their new king. The disguised night elf offers several quests to adventurers to help them save the Winterfin tribe and defeat Claximus.

After the Cataclysm, King Mrgl-Mrgl enters the fray against the forces of Ragnaros at Sethria's Roost, still using his murloc costume. He is one of the possible allies to replace one of the Hyjal Protectors during The Protectors of Hyjal daily quest. 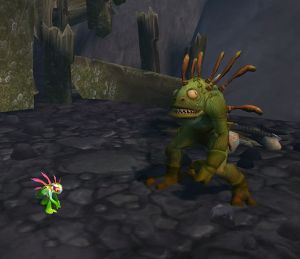 Mrgl-Mrgl and Murky in Shipwreck Cove.

While hunting on the northern coast of Highmountain, Hemet Nesingwary and his crew ran into Mrgl-Mrgl. Hemet, believing the night elf to not be quite right in the head, sends adventurers at Nesingwary's Retreat to seek him out in the Shipwreck Cove. Once they arrive, Mrgl-Mrgl tells them that the intends to save the ruthless Swamprock murlocs — who enjoy intentionally causing shipwrecks along the shore — by raising a young murloc named Murky as the new leader of the tribe, rather than simply sending the adventurer out to kill the adult Swamprocks. To this end, the adventurer helps Murky grow stronger, learn new abilities and recruit the Swamprock tadpoles to the cause.

After the recruitment of the tadpoles, Mrgl-Mrgl decides that the nearby Murkloc Cave would be the perfect hideout for Murky and his followers to train and muster their strength away from the adults, but first the Cavemoss makrura inhabiting the area need to be shown "what for". Since Murky is inexperienced, Mrgl-Mrgl has the adventurer "mindmeld" with the young murloc in order to drive out the makrura and kill their leader, Clawdayshus. Upon Clawdayshus' death, King Mrgl-Mrgl charges into the cave with the Swamprock tadpoles in tow, proclaiming that the cave now belongs to the "Murkloc tribe". Mrgl-Mrgl then decides to stay with Murky to observe the growth of the newly-formed tribe.

He can also be found at the Timeworn Strand in Azsuna where he gives Honor for Timeworn Artifacts.

King Mrgl-Mrgl is in Nazjatar and has Mrgl's Bar and Gill, which is full of Murloc Patrons. Most of his interactions with the player involve trying to restock the bar in order to keep the murlocs entertained and well-fed, something he acknowledges is difficult, due to the ferocity shown by this particular branch of the species. He even asks the player to hunt for crabs, admitting that doing so is contradictory to the overall goal of D.E.H.T.A., claiming it is necessary to prevent the patrons from preying on humans.

I recently came here to observe the Winterfin murlocs. Disguised as one of them, I kept my distance and took notes on their day-to-day life.

However, not long after I arrived, that all changed.

An earthquake in Coldarra caused a landslide, which exposed the nearby caverns. Out came a strange makrura who stole away with the Winterfins' tadpoles. When the murlocs went into the caverns to rescue their young, they re-emerged, glowing and under the makrura's influence.

Now, the unaffected have retreated to here, and I have reluctantly assumed their leadership.

On approach at Shipwreck Cove:

King Mrgl-Mrgl says: Murky, we need you to get stronger! The fate of this coast depends on it!
Murky says: Mrrglrrgl!

When spoken to at Shipwreck Cove:

The Swamprock murlocs' favorite thing to do is cause shipwrecks with their makeshift lighthouse. Murlocs are fascinating, but these are ruthless.

We must save this coast! I have been raising this young murloc, Murky. We need to help him become stronger so he can teach the tadpoles to be better than their elders.

Upon leaving and then returning to him while accompanied by Murky:

This is a job for Murky in order to prove himself. Use his egg to mindmeld with Murky.

I've perfected my murloc mindmeld technique over many years.

This cave belongs to the Murkloc tribe!

When spoken to inside the Murkloc Cave:

Murky is doing exquisitely! He and his followers are working and training quite hard. Once they're fully grown, I believe that the Swamprock Tribe will be a successful, budding group of murlocs. Who knows what they'll be able to accomplish! I'm going to stay here to observe. Thank you for all your help, <name>.

Gurglll... wait, oh! Hey. Careful out here, those naga aren't friendly. They've been enslaving this nearby Shoalfin murloc tribe. This refuge is all they have left against the incursion. We could really use your help!

One more thing... if you find any of those Timeworn Artifacts the naga are carrying, mind bringing them back to me? I need them for my research. It'll be worth it, I promise!

Whenever I am in a dangerous situation, I remind myself that a wise murloc once said: "Mrglgl grrk rrgl brgldrk!"