King Phaoris is the racial leader of the Ramkahen tribe of tol'vir, and is located in the town of Ramkahen in Uldum. 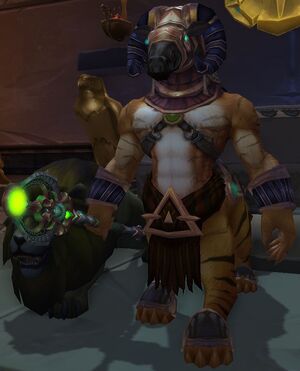 King Phaoris in World of Warcraft.

Beset by Neferset tol'vir who have allied with Deathwing and Al'akir, King Phaoris welcomes adventurers who have come to aid the Ramkahen. With his army moving forward and adventurers moving forth to strike out against his enemies, the King is able to invade and capture the enemy-controlled Neferset City and, in the process, become the undisputed ruler of Uldum.

When Chen and Li Li Stormstout arrived in Ramkahen, Phaoris was reading charges against prisoners, survivors of the Neferset tribe, and declaring that sentencing would pass after he and the High Council had finished discussing it. When Menrim appeared before him and the rest of the council to plead for the lives of the prisoners, the King remarked that they had already heard him, but promised that they would ensure justice would be delivered, whatever form it might take.

During this time, members of the Explorers' League approached the King requesting permission to learn from the ancient sites of Uldum. In turn, the King warned how an expedition of gnomes went poking in the ruins to the south and subsequently lost their minds. However, due to how outsiders provided invaluable aid, King Phaoris gave the Explorers' League permission to stay in the city but warned them not to push the boundaries of their welcome and that some things are better left buried.

After deciding on the fate of the prisoners, King Phaoris allowed each prisoner to speak for themselves in order to enlighten the citizens of Ramkahen as to why the King and Council came to their decision. The prisoners were then sentenced to death.[1]

Phaoris meets with Li Li and the new Grand Master of the Order of the Broken Temple, the monks who survived the destruction of their sanctuary in Pandaria. The Grand Master seeks the Fists of the Heavens, a pair of handblades crafted by the bronzesmith Irmaat, to wield against the Burning Legion. Phaoris reveals the legend behind the blades to them and offers to help, directing them to the elemental Nader in Ahmtul. Nader is found to be carrying an elemental stone, which Phaoris explains would be powerful enough to take whoever used it into Skywall itself. The Grand Master and Li Li use the stone to travel to Skywall, where they locate and claim the Fists of the Heavens.

Following an assault by the forces of N'Zoth on the Forge of Origination, Phaoris establishes an accord between the Ramkahen, Wastewanders, and Explorers' League to protect Uldum from rising threats. Within the Vision of the Twisting Sands, N'Zoth's vision of Uldum, a corrupted version of the King can be faced and killed.

I welcome you to Ramkahen, <class>.

Phaoris appears as a legendary card in the Saviors of Uldum expansion for Hearthstone. His flavor text reads: "When you're the king of the cats, the whole desert is your litterbox." This eventually became a spoken quote in World of Warcraft, when voice lines were added in patch 8.3.0.