From Wowpedia
(Redirected from Kingdom of Ahn'Qiraj)
Jump to: navigation, search

This article is about lore and history of Ahn'Qiraj. For the in-game zone, see Ahn'Qiraj: The Fallen Kingdom.

Ahn'Qiraj (pronounced "AWN-key-rawj",[1]), or the qiraji empire,[2][3] is the city-kingdom of the qiraji found in the southern part of Silithus. It was originally a titan research station which housed the old god C'Thun before being commandeered by the aqir, who would become the qiraji led by the Twin Emperors: Vek'nilash and Vek'lor.[4] Following the War of the Shifting Sands, the kingdom was contained from the rest of the world by the Scarab Wall, until it was opened again recently. 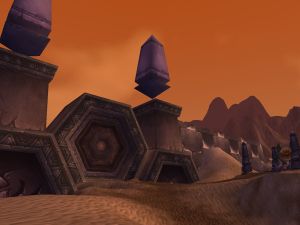 The closed gates of Ahn'Qiraj. 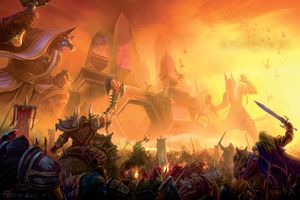 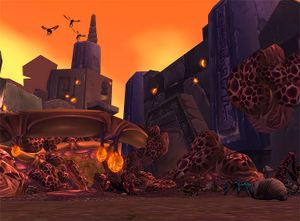 Ahn'Qiraj was constructed by the titan-forged during the ordering of Azeroth and watched over by the Highkeeper Ra, acting as both a city for the titan-forged and prison for C'Thun, similar to Ulduar. The tol'vir and anubisath sentinels were created to maintain titan lore repositories and titan machinery surrounding the titan city of Uldum and Ahn'Qiraj.[5] Eventually, the Highkeeper Ra learned of his masters' fates and abandoned all hope, secluding himself in the Vale of Eternal Blossoms.[6]

Thousands of years later, after the troll empires divided the insectoid kingdom of the aqir, the aqir that traveled southwest ransacked the titan city and renamed themselves the qiraji. The qiraji spent the next thousands of years within the city of Ahn'Qiraj in hibernation, hiding from the trolls and quietly growing in number.[7]

In time the night elves, along with their expanding empire, began venturing into the southern lands. Upon delving into the ruined city, the qiraji were stirred awake and the War of the Shifting Sands began, raging for several long, agonizing months. The night elves were always on the defensive, always outnumbered, and always driven back. The whole of Silithus was soon engulfed by the silithid and their qiraji hosts. Out of desperation, the night elven leader, Fandral Staghelm, sought the aid of the elusive bronze dragonflight. Their initial refusal to interfere was reversed when the brazen qiraji attacked the Caverns of Time, home and province of Nozdormu, the Timeless One. The dragons and Fandral Staghelm ultimately hatched a final, desperate plan: to contain the qiraji within the city of Ahn'Qiraj, erecting a barrier that would confine them until a more hopeful stratagem could be devised. With the blessing of Elune the barrier was erected before their eyes, rock and stone and roots from beneath the sands emerging to create an impenetrable wall. Even the winged soldiers who attempted to fly over the barrier met with an invisible obstruction that they could not pass. The qiraji who remained outside the wall were quickly slain. The dragon told Fandral that should any mortal ever wish to pass the magical barrier and access the ancient city, they need only strike the scepter against the gong and the gates would open. He then entrusted the scepter to the arch-druid.[8]

The threat posed by the qiraji has thus remained behind its wall for thousands of years. Recently, however, the unmentionable Old God C'Thun slowly awakened from his slumber beneath Ahn'Qiraj. Behind the gates of the Scarab Wall, the merciless qiraji stirred once again. Empowered by the Old God, C'Thun, the qiraji prepared their legions for a worldwide assault to avenge their bitter defeat at the hands of the night elves a thousand years ago.[9] It was discovered that some of the qiraji were finding ways past the wall. Anachronos, the bronze dragon, helped the adventurers of Azeroth open the Scarab Wall to prevent more incursions. After Shiromar[8] rang the gong with the Scepter the ancient gates of Ahn'Qiraj opened, revealing the horrors of a forgotten war.[10]

After the Gates of Ahn'Qiraj were shattered, and the qiraji poured forth. The combined forces of the Horde and the Alliance, with High Overlord Varok Saurfang as their Supreme Commander, had to stop the qiraji before they could overrun Silithus and eventually Kalimdor. The qiraji General Rajaxx commanded the opposing forces, and an endless flow of silithid and corrupted anubisaths flooded Silithus. This battle stretched across all of Kalimdor, with qiraji resonating crystals summoning the insects.[11] Nonetheless the Might of Kalimdor was victorious. The last of the qiraji forces were defeated, retreating back to the ancient city-fortress of Ahn'Qiraj. The Qiraji Resonating Crystals littering Kalimdor vanish as quickly as they appeared, leaving behind nothing but sundered earth.[12] Adventurers fought the qiraji and finally reached the chamber of C'Thun. After C'Thun was defeated his remnants were brought to Caelestrasz.[13]

After the Ahn'Qiraj War the ogre mage Cho'gall took shelter within the chamber of C'Thun deep inside the Temple of Ahn'Qiraj. While the Alliance and Horde were focused on defeating the Lich King, Cho'gall hung the half-breed Med'an on the corpse of the Old God C'Thun, where Med'an would be tormented by the Old God's mad whisperings. As Cho'gall went about preparing for C'Thun's resurrection, but the power of the Old God monstrously deformed Cho'gall's body. Making their way deep into the ruined temple, Valeera Sanguinar and Meryl Winterstorm confronted the increasingly hideous Cho'gall and managed to recover Med'an. It was later revealed that Cho'gall had planned to sacrifice Med'an and use Med'an's potent magical power to resurrect C'Thun. Cho'gall began performing the rites and channeled a great deal of energy, but Med'an was able to contain it within a ward around the ogre. Restoring Atiesh, Greatstaff of the Guardian to its rightful state, Med'an focused the powers of the council through it to defeat Cho'gall, burying him beneath the rubble of Ahn'Qiraj.

During the Elemental Unrest, it was revealed that some qiraji led by Prince Sarsarun still reside in Ahn'Qiraj and some worship Cho'gall. Alliance adventurers led by Varian Wrynn or Horde led by Cairne Bloodhoof defeated these qiraji before they could invade Stormwind and Thunder Bluff.

With patch 4.0.3a and the introduction of flying in Azeroth, the outdoor, uninstanced part of Ahn'Qiraj became a zone named Ahn'Qiraj: The Fallen Kingdom. It consists of a facsimile of the raid instances with no mobs or quests, similar to what was once Zul'Gurub. It currently serves no purpose. Accompanying these changes, the Ahn'Qiraj instances were tweaked to accommodate half of the previous number of players, though the enemies located inside are still level 60.

Ahn'Qiraj: The Fallen Kingdom comprised two raid instances in pre-expansion World of Warcraft: The Ruins of Ahn'Qiraj (20 person) and the Temple of Ahn'Qiraj (40 person). The Gates of Ahn'Qiraj could only be opened by a series of player-driven quests (part of which was the Ahn'Qiraj War Effort). When completed, this triggered a World Event, and the gates opened. Once the gates were open, the spoils of the kingdom would be available for anyone on the server who could rise to the challenge.

Although the instance was not activated until 1.9, the Scarab Wall (the gate to Ahn'Qiraj) has been present since early on in the game's release. Prior to World of Warcraft: Cataclysm, the area where Ahn'Qiraj is physically located beyond the portal gates was inaccessible and there was a "dead zone" on the world map south of Silithus.

[Membrane of C'Thun], it remains to be seen what will happen to Ahn'Qiraj.

The city of Ahn'Qiraj is populated by the remaining forces of the qiraji empire. These include various forms of silithus bugs.