From Wowpedia
(Redirected from Kingdom of Ironforge)
Jump to: navigation, search

This article is about dwarven kingdom. For the in-game reputation faction, see Ironforge (faction). For the kingdom from the Warcraft film universe, see Kingdom of Ironforge (film universe).

The Kingdom of Ironforge[1] (also known as the Kingdom of Khaz Modan,[2][3][4] or simply Ironforge[5][6]) is the major government of the dwarves on the continent of Khaz Modan. Being a senatorial monarchy, it is now reigned by the Council of Three Hammers, composed of one member from each major dwarven clan, until the heir Dagran Thaurissan II is old enough. The kingdom also has its own treasury.

The dwarven kingdom was founded after the awakened dwarves ventured out from the ancient city of Uldaman.

In former times, the Kingdom, led by the Anvilmar family, ruled over the three big dwarven clans Bronzebeard, Wildhammer, and Dark Iron clan. After the death of Modimus Anvilmar, the tensions between the clans erupted in a civil war, called the War of the Three Hammers. The Bronzebeards emerged victorious due to owning the largest, best-equipped army, and banished the other clans from Ironforge, which founded their own kingdoms.

The later attempt to seize Ironforge by the Dark Irons was repelled by the Bronzebeards and Wildhammer together, but even as Grim Batol, the home of the Wildhammers, was now uninhabitable, they declined the offer to return to Ironforge.

They encountered the humans, perhaps their most important allies, ca. 1800 years before the First War and at the same time the high elves as the elves and humans were already allies.[7] Gilneas and Alterac, strong supporters of Strom and the Arathor Empire, had developed mighty armies that explored the mountainous southern lands of Khaz Modan. It was during this period that humans first met the ancient race of dwarves and traveled to their cavernous subterranean city of Ironforge. The humans and dwarves shared many secrets of metal-smithing and engineering and discovered a common love for battle and storytelling.[8]

Pledged to the human Alliance, the dwarves of Ironforge fought against the orcs during the Second War. Although the Horde pushed into Khaz Modan, laying waste to Loch Modan and the Wetlands and turning the Thandol Span into a constant battleground, they couldn't breach the capital city in the Siege of Ironforge and were defeated completely by Lothar's counterattack.

In the aftermath of the war, the Alliance began fracturing and some of its members seceded from the Alliance. King Magni Bronzebeard, who vowed that the dwarves of Ironforge would forever owe a debt of honor to the Alliance for liberating Khaz Modan from the Horde's control, remained a staunch supporter of the Alliance.[9]

With the collapse of the Alliance of Lordaeron, the kingdom remained an ally of the modern Alliance and participated in their battles,[10] calling this state that Ironforge Reserve was called to the Alliance Front.[11]

When freak natural disasters began rocking much of Azeroth just prior to the Cataclysm, the dwarven lands were not spared from the calamitous upheavals. A series of violent quakes tore through areas surrounding Ironforge, reducing settlements to rubble and taking the lives of many innocent dwarves in the process. To glean answers as to the troubling state of the world, King Magni selflessly underwent a mystic ritual to commune with the earth. The archaic ceremony, however, had an unexpected effect: Magni was transformed into diamond and became fused to the depths of Ironforge itself.

In the power vacuum that followed, his estranged daughter, Moira, who had married into the much despised Dark Iron clan, briefly claimed Ironforge’s throne and effectively locked down the city. If not for the intervention of King Varian Wrynn of Stormwind and his son, Prince Anduin, her brash actions might have sparked another civil war. With Varian’s guidance, control of Ironforge has since been divided equally among the Bronzebeard, Wildhammer, and Dark Iron clans through the Council of Three Hammers. Yet as bitterness and prejudice fester among the clans, the council’s ability to govern as one remains uncertain.

The representatives of each dwarven clan in the council is:

One day, King Varian's scouts had discovered that Zandalari trolls threatened the dwarven capital by rallying the Frostmane trolls against them. The king believed that if he aided them against the trolls they would give him more troops for his campaign against the Horde. But the King didn't realize that the dwarven clans did not trust one another. When Varian sought the help from the Council of Three Hammers, both Muradin and Falstad declined to offer aid in Ironforge's defense for they feared that if they left to fight the Frostmane trolls, the Dark Irons would take advantage of their absence to defeat the remaining clan and take over Ironforge. Frustrated, Varian argued that if no one would help, then Ironforge will fall under siege. Only Moira Thaurissan offered aid, stating that the Dark Irons will prove their loyalty to the Council, Ironforge, and the Alliance in the defense of Ironforge. And so Moira and the High King set out in the snow to save the city, leaving the others to think about their actions.

The High King, his champions, and the Dark Iron dwarves worked together to save Ironforge. On their return, the other dwarven leaders were ashamed of their behavior and vowed never again to allow fear or distrust to cloud their judgment. Free to trust one another, all three dwarven leaders pledged their full strength to the Alliance cause.[12][13]

Please add any available information to this section.
Dwarven society is heavily influenced by their earthen ancestry and connection with the titans. Families unite in clans each headed by a thane, or high thane in case of larger clans.

Historically, the High King of dwarves is the ultimate leader of the united dwarven clans,[14] but since the War of the Three Hammers and the separation of core families in the kingdom, this title remains unused. With the recent reunion of said clans, prince Dagran Thaurissan II will presumably be coronated the next High King of dwarves upon reaching adulthood.

Since the War of Three Hammers, the kingdom of Ironforge has instead been ruled by a King of Khaz Modan, serving as the permanent head of government in the parts of Khaz Modan that remained under Bronzebeard control after the War of the Three Hammers. The position as King of Khaz Modan is currently entitled to first-borns of direct descent from Madoran Bronzebeard. First-born daughters of this line will instead carry on the entitlement unto their sons, rather than having their uncles take control. The personal advisor of the King will temporarily take command of the kingdom until a suitable successor is decided. After the crystallization of King Magni Bronzebeard, Advisor Belgrum ruled until the Council of Three Hammers was founded.

With the formation of the Council of Three Hammers, one representative from each of the three major clans - Muradin of the Bronzebeard clan, Falstad of the Wildhammer clan and Moira Bronzebeard representing the Dark Iron clan - will rule in unison until prince Dagran is fit to become Lord of Ironforge, King of Khaz Modan and presumably also the High King of dwarves.

The government, currently headed by the Three Hammers, historically by the King of Khaz Modan or the High King of dwarves, also consists of senators from the Senate of Ironforge. Some of these seats are reserved for respected dwarven clans and families, like the Anvilmar family and by the Lord of Ironforge. The Senate's exact role in government is unclear, but their field of issues includes investigating and eliminating possible threats to Ironforge,[15] keeping the production of the Dun Morogh mines optimal,[16] and setting funds aside for defense issues.[17]

The kingdom of Ironforge holds a prominent position within the heart of the Alliance as one of its most powerful member states. The chosen leader(s) of Ironforge thus hold a seat at the table of the High King of the Alliance, and Ironforge military often engages in Alliance operations. The deep political relations with other member states, especially the nearby Nation of Gnomeregan and Kingdom of Stormwind, have had a huge influence on Ironforge. Examples being the decision to grant asylum to the Gnomeregan Exiles integrating them within the Tinker Town of Ironforge, and the construction of the Deeprun Tram connecting Ironforge with Stormwind City, resulting in the formation of the Dwarven District in Stormwind. 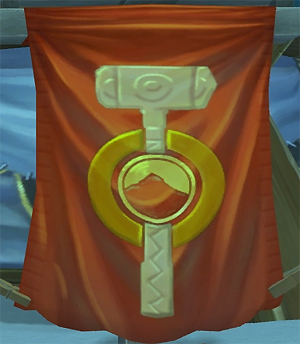 The banner of Ironforge and the Bronzebeard clan.

The kingdom of Ironforge[19] is a dwarven kingdom located in Dun Morogh of Khaz Modan. It's ruled by King Magni Bronzebeard and its capital is the underground city of Ironforge.[20]

The kingdom has good relations with the kingdom of Stormwind, doing businesses. According to Stormwind advisors, it is a tiny nation.[21]

The kingdom participated in the council that would eventually lead to the creation of the Alliance. 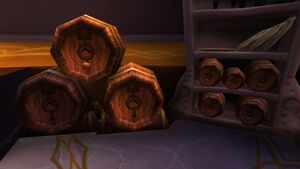