This article is about the dungeon. For the achievement, see

Kings' Rest is the second dungeon of two wings of the area known as Atal'Dazar.

Alliance access to the dungeon was originally unlocked through

Few places in Zandalar are more sacred than Kings' Rest. Every king, conqueror, or tyrant who has held control of the Zandalari empire is housed within this great city of the dead to protect and honor not only their bodies, but also their spirits.

Entry has historically been restricted solely to the Zandalari priesthood and royalty, but as Zul's dark magic winds its way through the tomb you must venture inside and put an end to the darkness that has found purchase there. 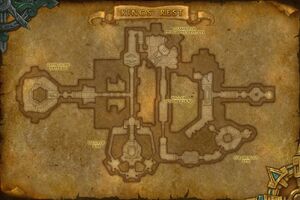 Hall of the Honored Dead

The large chamber in the middle of the tomb. When moving down the stairs upon having entered, you'll be met by three doorways. However, two of them are closed with only one open, the Approach of the Worthy that leads to the Lustrous Apse where the Golden Serpent is fought. The northern doorway leads to the Tomb of the Unworthy while the south-western door leads to the Resting Halls of the Conquered.

The Approach of the Worthy

You will be judged. You will be measured. The Serpent shall decide your fate.

The Tomb of the Unworthy

The final resting place of those the Serpent rejects. Remember not the names of those interred within.

The Resting Halls of the Conquered

Before you lie those that sought the throne and died for it. They embraced the truth every Zandalari knows: Dying while reaching for power carries no dishonor.

Hall of the Honored Dead

BEWARE - The Soulflayer's touch may yet abide here.

If you become infected, leap off this bridge. Better to die quickly than unleash the plague on Zandalar again.

Bring your offering. Display your strength. Turn the stone.

Then your fate is sealed.

Also known as the Mausoleum of Ashes, this hall connects the Hall of the Honored Dead and the Crypt of the First King.

The Mausoleum of Ashes

Ahead lies those who fell to plague, fire and Zulathra's folly at Uldum. May their spirits endure, even if their bodies did not.

Crypt of the First King

A golden, ornate chamber where the throne of Dazar, the First King is found.