For the Battle for Azeroth dungeon, see Kings' Rest. 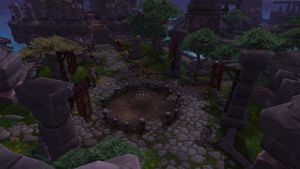 Kings' Rest is a sub-zone just west of the center of Ashran, on Draenor.

Kings' Rest is a small, open area with links to nearby secondary areas Ashmaul Burial Grounds, Ring of Conquest and Amphitheater of Annihilation. The area is notable for holding the Marketplace Graveyard, a capturable graveyard and the only resurrection point outside of the faction bases.

The Graveyard can be captured similarly to bases in Eye of the Storm, with the balance of players of each faction in the area determining the movement of the capture bar. By default, the Graveyard is neutral, with both factions able to resurrect there, but once captured will be available only to the controlling faction, remaining so for 15 minutes, at which point it will return to a neutral state. To capture the Graveyard, the capture bar must be moved all the way to the far end.