Kirin'Var Village is located in the southernmost floating island of the Netherstorm. This is a hub for various different quests.

Note that although the village's name appears on the Netherstorm map, there is no actual subzone named Kirin'Var Village. Instead, it is separated into four subzones, which contain different types of mobs — Wizard Row, Town Square, Chapel Yard, and Violet Tower. 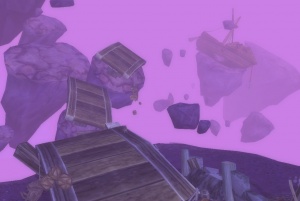 The remains of the wharf at Kirin'Var Village, once built at the shore of the Devouring Sea.

When the Alliance sent an expedition to Draenor in order to finish the Horde once and for all, a group of Kirin Tor wizards led by Archmage Vargoth established a base in the heart of the Laughing Skull clan's territory. They called it "Kirin'Var Village", located on the shore of the Devouring Sea. There they survived numerous orc assaults,[1] however, a short time after they had settled, Draenor was torn apart. The explosion devastated the land and all that remains today are the islands making up the Netherstorm. The surviving wizards remained in their village for seventeen years.[2]

Years later, Master Daellis Dawnstrike, along with his blood elven troops, attacked the village with more power than the wizards could imagine. In the end, Prince Kael'thas's forces used a Mana Bomb, similar to the one that eradicated the Cenarion Thicket, to completely destroy the village. Archmage Vargoth ordered his comrades to retreat to the local mage tower. However, Kael'thas was wiser and stronger than Vargoth remembered: in the moment that Vargoth and his men entered the tower, the elven prince sealed the doors with a curse on the tower to ensure that none of the wizards within would exit the Violet Tower. But despite Kael's efforts, one of Vargoth's apprentices escaped: Ravandwyr.

Ravandwyr saw Kael'thas' plans and escaped, but was unable to warn his master in time. With no one by his side but his "familiar", Ravandwyr fled to the Arklon Ruins but found the area being excavated by demons. He had to instead flee to Area 52, a goblin settlement. Ravandwyr has sought help ever since from adventurers.

Kirin'Var Village is now haunted by many of its past's residents due to the necromancer, and another apprentice of Vargoth, Naberius. Wizard Row has been overrun by Mana Invaders, Mana Seekers, and Mageslayers due to the Mana Bomb dropped there by Kael'thas' forces. Only two members of Kirin'Var managed to "keep" their spirits, Lieutenant-Sorcerer Morran and Custodian Dieworth. Many others "live life" like they were still alive.

Now that the Dark Portal has been opened once more, Ravandwyr seeks help from brave adventurers that cross into Outland.

There are several wandering named mobs in Kirin'Var Village who drop items, which initiates quests, when killed. All of these quests can be completed by returning the items to the respective mob's original home at the Wizard's Row in Kirin'Var Village. Currently, there are four mobs who drop these items. On completion of these quests, the associated NPC will become neutral to you.