For the orc of the same name, see Kiro (orc). 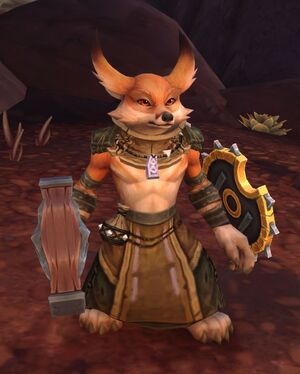 Kiro as he appears with his mace and shield at the Crater of Conquerors and the Feeding Pits.

Kiro is a caravan leader of the Voldunai vulpera, initially encountered at the Vulpera Hideaway in Vol'dun. He is slightly wary of outsiders but is a skilled healer.[1] Meerah describes him as being hard to keep track of, as he is "always on the move, always working on some big plan".[3] Nisha initially considers him to be overly passive in the face of sethrak aggression,[2][4] but Kiro himself urges adventurers not to mistake his caution for hesitance. He will defend the vulpera with his dying breath, but he'd "just prefer to avoid taking that breath today".[5] Kiro is very practical; for example, he told Meerah not to pick up a journal she found because it had no use and would just take up space in their wagon.[6]

Following the end of the Fourth War, Kiro and his people joined the Horde and sometime later was given a spot on the Horde Council.

Nisha, one of the members of Kiro's caravan, warned him that the sethrak would eventually attack and that the vulpera needed to make a preemptive strike against the snakemen, but Kiro insisted that they instead keep their heads down and continue to quietly do business. Eventually, Nisha was proven right when the Faithless attacked the Abandoned Burrows.[2][4]

After escaping from the Abandoned Burrows, Nisha and a recently arrived adventurer travel to Vulpera Hideaway to find Kiro tending to the adventurer's wounded friend Bladeguard Kaja[7] after she was found by Meerah. With the help of Kiro and Meerah, the adventurer heals Kaja.[1][8] Kiro offers to help the adventurer and Kaja in their search for the missing Warguard Rakera if they help the vulpera in turn, and sends the hero to retrieve some stolen knickknacks from the Faithless at the Serpent's Maw.[9]

Eventually, Kaja, Meerah, and the adventurer leave the Hideaway and travel south to search for Rakera. After finding the warguard, the group continues to Zul'Ahjin, where they encounter Kiro and Nisha along with Julwaba and her sethrak friend Serrik, who is dying from scorpid venom.[10] Nisha explains that she and Kiro are merely passing through Zul'Ahjin on their way to the Faithless empire.[11] Kiro offers to help heal the sethrak[10] and sends the adventurer to gather ingredients for an antivenom[12][13] that succeeds in saving Serrik's life.[14]

Kiro and Nisha, along with Meerah and other vulpera, later continue to the Faithless' stronghold in the north to take the fight directly to the sethrak. Kiro and Nisha work to rescue vulpera slaves while Meerah organizes caravans to carry them to safety.[3] Some time later, the adventurer and Vorrik join up with them. After the hero helps Nisha free vulpera slaves in the Crater of Conquerors,[15] Kiro sneaks off to the Faithless' Feeding Pits to continue sabotaging the sethrak behind the front lines. While Kiro himself sabotages the Faithless cannons on the upper levels of the compound, the adventurer travels through the Slithering Gulch and sets fire to the sethrak slave markets on their way to the beast pens.[5] Once at the Feeding Pits, Kiro sends the champion to take out the Faithless' krolusk tamers[16] and unleash a stampede of crawgs by killing Crawg Tamer Traskniss.[17] Kiro and the adventurer then ride back to the other vulpera at Vorrik's Sanctum using a stolen Battle Krolusk.[18]

After the Faithless emperor Korthek is ultimately defeated,[19] Kiro can be found back at the Vulpera Hideaway with Meerah and Nisha. He tells the adventurer that they have proven themselves a true ally to the vulpera and that they will always be welcome in the caravan.

After Rastakhan's death in the Battle of Dazar'alor, Kiro attended the king's funeral in Dazar'alor. He expressed disbelief at the Alliance's actions and stated that the vulpera would do what they could to help the Zandalari.[20] 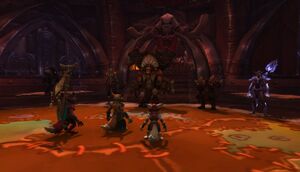 Kiro and the vulpera formally joining the Horde.

The vulpera eventually decided to join the Horde in order to explore the world beyond Vol'dun. Kiro traveled to Orgrimmar alongside Meerah and Nisha to speak with Baine Bloodhoof on behalf of his people, but Baine was forced to decline giving them membership as troubles facing the Horde's current allies had stretched the faction's resources thin.[22] The vulpera decided to offer their help, with Kiro sending Nisha and Meerah to Zuldazar and Suramar respectively while he and his mount Sasha traveled to the Twilight Highlands to help with work on an outpost near Crushblow.[23] Alongside the Horde adventurer, Kiro found that the Horde's peons—led by Foreman Magrok—were revolting and refusing to work on the outpost due to poor treatment by the Horde.[24] To appease them, Kiro decided to arrange a feast and sent the adventurer to gather meat from the nearby wildlife,[25] collect ore so he could repair the workers' broken tools,[26] and give promotions to some of the peons to help build confidence.[27] Once the feast was underway at Crushblow, Kiro sent the adventurer to challenge and defeat Foreman Magrok to ensure there would be no further revolts.[28] With the peons now back to work, Kiro headed back to Orgrimmar. Once Meerah and Nisha completed their tasks as well, Baine realized that he had been wrong to dismiss the vulpera so quickly and offered them a place in the Horde, which Kiro gladly accepted.[29] As a member of the Horde, Kiro can subsequently be found in the Valley of Honor next to Meerah, Nisha, and Nilsa, playing his flute.

Kiro later had Hagashi, the innkeeper at the Vulpera Hideaway, put together a small memento to give to vulpera adventurers in appreciation of their efforts to prove their people's worth to the Horde.[30]

Having joined the Horde Council, Kiro was present at a council meeting when an assassination attempt was made on Talanji, the Zandalari queen and a key ally.[31] He was not present at the meeting that sent Zekhan to Zuldazar.

Upon learning that the Alliance was aware of the unrest in Zandalar, their belief that Talanji was working with Sylvanas, and that they had requested to speak with the council, another meeting was held. Declaring that Zandalar was still their home and that it should be healed from the treachery within Kiro voiced support for Thrall and Ji Firepaw to meet Jaina Proudmoore and Anduin Wrynn.[32] 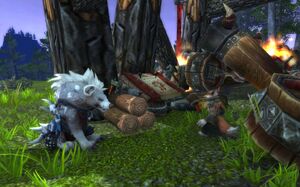 Kiro and Sasha at the Crushblow outpost.

Zul'Ahjin
It's good to see the sands haven't swallowed you yet.

Crater of Conquerors
I wish the Faithless would've been content with peace. We always were.
But their unrelenting aggression has finally forced our hand.
We will take down Emperor Korthek... and we'll take anything useful we find along the way.

Slithering Gulch
The Faithless treat their beasts cruelly. It isn't difficult to turn them against their masters.

Vorrik's Sanctum
We've done our part, <name>. I'm proud of what we've accomplished here.
But now it's time for me to look after my people and ensure their safety.
I've no doubt we will meet again. I'm proud to call you a friend and ally.

[110 - 120] The Fall of Emperor Korthek
You have proven yourself a true ally, <name>.
You are always welcome in our caravan, here or anywhere else that the sands take us.

[120] The King's Death
News spread to Vol'dun about Rastakhan's death. I couldn't believe it. I understand the Alliance wants to stop the Horde... but this is too far.
My people will do what we can to help the Zandalari through this difficult time.

In Orgrimmar during the vulpera recruitment questline
I'd say we're making progress, <name>.

Peon Hideout
We will do whatever we can to boost morale.

Valley of Honor
In these moments of calm, I can't help but wonder what new adventures await.

Since Kiro is a healer, can be seen wielding a hammer and shield during the campaign against the Faithless, and owns at least one totem,[25] he is most likely a shaman.