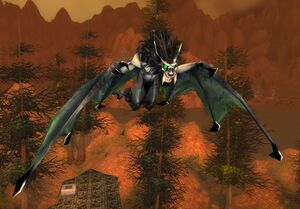 Kirtonos the Herald is an undead level 43 elite who can transform into a gargoyle, though this form was intended to represent a vampyr.

Long ago, he became the master of Scholomance's Doctor Theolen Krastinov. Responsible for many of the atrocities during Krastinov's rule over Scholomance, Kirtonos fed on the blood of his innocent victims. To appease his master, Doctor Krastinov had to provide the gargoyle with more and more blood.

In later days, Kirtonos was a rare visitor to Scholomance. The

[Blood of Innocents] was not easy to obtain around Caer Darrow now that most of its inhabitants were dead. Only the ghosts remained, plotting the gargoyle's demise.

He can now be seen flying in gargoyle form above Gahrron's Withering in the Western Plaguelands, where he can't attack or be attacked.

Kirtonos the Herald is an optional boss that needs to be summoned in the small alcove near The Summoning Room. There is a brazier that requires the use of the

[Blood of Innocents] (be sure no one is outside the gate at the top of the stairs when you use the blood — the gate shuts). Kirtonos will fly through the window, transform to his humanoid form, and engage you.

Tank him at the top of the stairs. He has a knockback attack and if he sends you out the window, you will zone out of the instance. 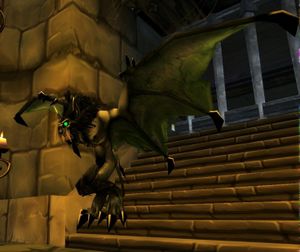 Kirtonos in his gargoyle form.

On the way to the Stratholme Live side, after clearing the gate trap, you will see a sign in front of you at the fork in the road. This sign reads Kirtonos Bros. Funeral Home. It is speculated that Kirtonos once lived in Stratholme before the war.

How or if this is connected to his vampirism is unclear. Although, if he has always been a gargoyle, it probably is not connected to him. It is possible however that, being a funeral parlor, Kirtonos fed on the blood of the deceased, as his business dealt with them.

Given his title, and the person who founded Scholomance, Kirtonos was probably the herald of Kel'Thuzad.