[Knights of the Ebon Blade]. For the quest, see

“We are eternal. We are unyielding.”

The Knights of the Ebon Blade are an organization of renegade death knights. Freed from the grasp of the Lich King, they regrouped under the banner of Highlord Darion Mograine and helped defeat Arthas. During the third invasion of the Burning Legion, the Ebon Blade, aided by the new Lich King Bolvar Fordragon, fought alongside the other orders, and moved their order hall and floating necropolis of Acherus above the Broken Isles. The Ebon Blade also possess three other bases in Northrend, namely the Ebon Watch in Zul'Drak, and the Shadow Vault and Death's Rise in Icecrown. 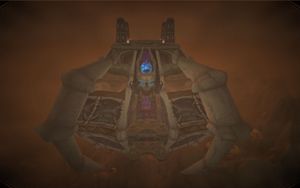 The Knights of the Ebon Blade were originally an army of Scourge death knights trained in the halls of Acherus and were under the direct command of the Lich King. They were supposedly trained for the specific purpose of destroying both the Scarlet Crusade and the Argent Dawn, the last bastions of Light in the Plaguelands, while in reality they were sent to their death in hopes of drawing Tirion Fordring out for the Lich King to raise him.

They managed to destroy Havenshire and New Avalon, and destroyed the Scarlet Crusade presence in the Scarlet lands[2] before turning on Light's Hope.

During the Battle for Light's Hope Chapel, where ten thousand Scourge faced off against three hundred defenders of the Light, the

[Corrupted Ashbringer] wielded by the death knight commander, Highlord Darion Mograine, refuses to obey its wielder. When Fordring arrives, his powers of the Light prove too great for even ten thousand to oppose, and Mograine orders his death knights to surrender. Fordring scolds Mograine for his foolishness and tells him that Arthas sent him and his death knights on a suicide mission. As they await the paladin's judgment, they witness a vision of Mograine's father, Alexandros, the legendary Ashbringer himself. He told his son that he would one day wield the Ashbringer and use it to mete out justice, but "that day is not today".

The Lich King himself arrives not long afterwards and confirms that he had indeed sent the death knights to their deaths in order to bring Fordring out of hiding. Enraged by this treachery, Mograine attacks, but the Lich King swats him aside in one hit and focuses his attention on Fordring, incapacitating him with a crippling spell and knocking back the Argent soldiers who charged in. Remembering the words spoken by his father, Mograine throws the corrupted Ashbringer to Fordring, whose powers of the Light succeed in purifying it. With the purified blade in hand, Fordring charges into the Lich King and throws him back. Leaving their battle for another day, the lord of the Scourge flees back to Northrend, warning Tirion that: "When next we meet, it won't be on holy ground, paladin."

After Arthas' departure, Fordring calls for the union of the Argent Dawn and the Order of the Silver Hand into the Argent Crusade, intended to bring the war to Icecrown itself. Mograine pledges himself and his knights to the same cause, naming his new order the Knights of the Ebon Blade. With their free will restored, Mograine and his death knights return to Acherus and capture it, destroying the Scourge remnants within. With their new base secured, Mograine then sends his knights to rejoin their people, sending them to throw themselves at the mercy of either King Varian Wrynn in Stormwind (if their race belonged to the Alliance) or Warchief Vol'jin (originally Warchief Thrall and later Warchief Garrosh Hellscream) in Orgrimmar (if they belonged to the Horde).

The surviving death knights that remained loyal to the Scourge formed the Host of Suffering with Orbaz Bloodbane, who fled when the Scourge was defeated at Light's Hope, as their leader.

Although the members of the Argent Crusade still stand by the Forsaken heroes who joined them in the battle against the Scourge, Sylvanas Windrunner's actions since the slaying of Arthas had deeply concerned the crusaders. They, along with certain members of the Ebon Blade, decided to watch Sylvanas and the Forsaken very closely, as similarities between her and the Lich King kept increasing in number by the day.[3]

Taking the chance to discover the secrets of Ner'zhul, Darion Mograine had traveled to alternate Draenor and could be found in the Lunarfall Inn (Alliance) and the Frostwall Tavern (Horde). Though the Lich King had been defeated, Darion claimed that they were no closer to unlocking the secrets of the Frozen Throne than they were when jousting pointlessly at the Argent Tournament. Bolvar remained resigned to his fate. Darion believed that perhaps there was something there that could aid their cause. Ner'zhul was not always the Lich King, he explained. Once, he was a mere orc dabbling in dark powers beyond his comprehension. He asked the commanders of the Alliance and Horde's forces to find whatever they could of Ner'zhul's early studies, and they returned with a Dark Parchment from the Shadowmoon Burial Grounds, which Darion brought back to the Ebon Hold.[4]

A death knight adventurer also appeared in Spires of Arak.

Following the return of the Burning Legion, the Knights of the Ebon Blade come to an agreement with the new Lich King, Bolvar Fordragon: The Ebon Blade will willingly act as the Lich King's agents against the Legion, if the Scourge remains contained to Northrend. The Lich King offers powerful weapons to champions of the Ebon Blade, directing students of Lord Thorval to the world of Niskara to defeat Gorelix the Fleshripper and take the

[Maw of the Damned], and sending the students of Lady Alistra to the catacombs beneath Karazhan to obtain

[Apocalypse] from the Dark Riders. For those trained by Amal'thazad, the Lich King summons them directly to Icecrown Citadel, where they gather the broken shards of Frostmourne to forge into a pair of new weapons, the Blades of the Fallen Prince. Once these three weapons are obtained, the death knights wielding them are brought to the Frozen Throne and granted the Lich King's blessing, empowered to act in his name against the Legion.

The Knights of the Ebon Blade also set out to reform the Four Horsemen, adding new powerful champions into their ranks.

The Knights of the Ebon Blade also aided in the war against the Burning Legion by sending out packs of ghouls to fight against the demons,[5] as well as creating new death knights from the casualties of the Alliance and the Horde.[6]

Thassarian also asked death knight champions to aid him in rescuing Koltira Deathweaver from his imprisonment in the Undercity.[7] Koltira is successfully rescued after the two death knights fight through the guards.

All players, with the exception of death knights, start out at neutral with the Knights of the Ebon Blade. Upon the completion of

[55] The Light of Dawn, death knights are raised to friendly reputation.

Reputation with Knights of the Ebon Blade can be earned by completing the following daily quests:

Additionally, as with some other factions, reputation can be gained through Championing via the [Tabard of the Ebon Blade], or by trading 1

[Emblem of Triumph] for 1

[Ebon Blade Commendation Badge] at the Emblem of Triumph Quartermaster in Dalaran.

These rewards can only be purchased after completing the

[80] It's All Fun and Games questline in Icecrown. The questline is available starting at level 77 from

Thassarian on the The Skybreaker,

Baron Sliver at the Shadow Vault.

Rewards are bought from

at the Shadow Vault.