Kobolds (pronounced "KOH-bawld")[4] are a race of diminutive, rat-like subterranean humanoids who dwell in and around caverns and mines throughout the Eastern Kingdoms, Kalimdor and the Broken Isles. They are not particularly intelligent and are notoriously cowardly, preferring to keep their distance from other, larger races. Kobolds are famous for being obsessively protective of the candles they wear upon their heads and which help them light their way through the dark tunnels they call home.

A race of arctic kobolds known as snobolds make their home in the frozen wastes of Northrend.

Brann Bronzebeard has theorized that kobolds evolved from troggs.[5][6] Around the year 2,700 BDP, kobolds were among the threats that early human settlers faced in the Tirisfal Glades.[7]

During the construction of the orcish city of Orgrimmar, the goblin workers under the command of Gazlowe started dredging out tunnels beneath the city in search for underground wells. However, in doing so, they accidentally dug straight into a kobold den, and before long the "rat-freaks", as Gazlowe called them, overran the goblin tunnels. Rexxar helped the goblins seal up the kobolds by escorting goblin sappers to the tunnels' support beams.[8]

The kobolds of Candle Rock in Highmountain lived in peace until the drogbar took their caverns. But the drogbar were swallowed whole by the Devouring Darkness, and the cavern became theirs again, as the kobolds were protected from the Darkness by their candles.

According to Spiritwalker Ebonhorn, the Darkness the kobold fear is Uul'gyneth.[9] 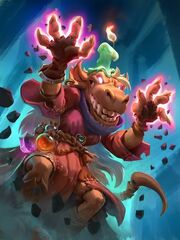 Kobolds are not particularly bright and are considered more an annoyance than a true danger, but they also breed like rabbits and are always found in large numbers wherever they dwell. They are only four feet tall at best, and though they have excellent vision in low-light conditions, in the darkest recesses of mines and caves they still need a source of light in order to be able to see, hence their reliance on candles. When a group of kobolds is agitated, their tails whip back and forth, and they stink horribly, regardless of whether they are alive or dead.[3] It is said that "For every kobold you see, there are a hundred more."[10]

Kobolds are slovenly,[11] cowardly and pathetic by nature, though they can be riled to action when backed into a corner.[12] Fearful of other races[5] and possessing of limited intelligence, they usually try to stay away from populated areas where other, larger races dwell.[12] Kobolds are perhaps best known for their penchant for digging and their underground excavations.[11]

The kobold clans of Highmountain use skulls to designate their leadership, and they are unintelligent enough to believe a non-kobold to be their leader as long as they're wearing a skull.[13][14] Kobolds outside the Broken Isles appear to instead identify leaders based on who has the longest candle.[15]

Kobolds do not honor their ancestors in the way that other intelligent races do.[16]

Despite living underground, kobolds do not have keen nocturnal sight, and rely on candles to traverse the mines they call home.[5] However, kobold legends also speak of a dark, devouring presence deep in the caverns of Highmountain, which is the reason that the kobolds fear the dark.[17] The Bluewax of Candle Rock frequently mention that if a kobold's candle goes out, or if they lack a candle altogether, "the darkness" will "eat them".[18][19][20] The Bluewax historian Kipp Brightwick tells how the Bluewax were once forced out of their home by a group of drogbar who claimed the cave as their own. However, the drogbar did not have candles, and so "the darkness" began to follow them, until it finally "swallowed them whole", allowing the kobolds — safe with their candles — to move back in.[21] Additionally, a circle of six large candles can be found in the eastern part of Candle Rock. If an adventurer extinguishes the flames of all six candles, a large voidwraith called "Devouring Darkness" will appear and attack them. However, the true Darkness they feared is Uul'gyneth, the herald of the Old Gods.[22]

Fresh ear wax is the best material to create candles.[21][19] Kobolds also use wax to wax off extra hairs or make "drip baths".[23]

The Bluewax kobolds are known to keep rats as both pets and as a source of food.[21] The critters are not afraid of the darkness the kobolds fear and they make good diggers, or "good dinner if not", as well as good friends, unless they bite, in which case they instead make a good meal. Additionally, they are apparently both tastier and easier to catch than rabbits.[24]

Kobolds are simple creatures and most are only capable of earth magic. A few of them have perfected a "rather nasty" fireball, but little else,[25] though their ranks are also known to contain pyromancers.[1]

Following the Cataclysm, the geomancers of the Tunnel Rat group, a colony loyal to the Axis of Awful, managed to figure out some kind of parlor trick which allowed them to enslave a large amount of troggs. They were able to do this because the troggs are ultimately considered creatures of the earth.[26]

Most kobolds are warriors, skilled with their mining picks. Their style of fighting involves attacking with as many allies as possible, and beating the offending person(s) to death with the aforementioned mining picks. According to Lasan Skyhorn, kobolds are very poor at mining.[citation needed]

Kobolds are frequently enslaved by gnolls, who force the rat-like humanoids into an existence of neverending drudgery. Since their enslavement, the historically meek kobolds have grown bitter and aggressive toward any creature that meddles with their ceaseless labor.[11][27]

Incredibly, kobold clans have successfully forged ties with the vicious harpies.[5] In Highmountain, some kobolds offer stolen and scavenged trinkets, oftentimes items that would be broken and worthless to anyone else, and the harpies provide protection for their offerings of obedience,[10] whereas other kobolds simply trade "shinies" to the harpies in exchange for fresh ear wax to make more candles.[21][18]

In Northrend, the giant magnataur have become strangely tolerant of the arctic kobolds or "snobolds", who follow the magnataur herds for safety and mutual benefit during long hunts.[5][28]

Ever since the theft of the

[Hammer of Khaz'goroth], the kobolds of Highmountain have become very prolific and have now become a noticeable nuisance to the Highmountain tauren,[10] who once thought them to be nothing more than overgrown rats.[29] The Bluewax have begun raiding the Sepulcher of the Sky and even infiltrating Thunder Totem itself to steal ceremonial drums[30] while the Skywhisker have allied themselves with the Crawliac harpies assaulting Skyhorn.

Some common kobold utterances include:

Candle Rock, home of the Bluewax.

A kobold in Warcraft III: Reign of Chaos. 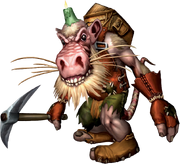 As depicted in the Monster Guide.

Kobolds are little humanoids afraid to venture into the light for fear of their own shadows. Still, they fight ferociously to the death once backed into a corner.[31]

Kobolds are rat-like humanoids that dwell in underground tunnels and spend their lives mining, primarily for gold. They are cowardly, cringing folk who live in fear of larger races and rarely venture outside their tunnels. However, while not powerful individually, they congregate in large numbers and can prove a nuisance and occasionally a danger.

Kobolds live in tunnels going deep into the Alterac and Redridge Mountains. Kobolds are most at home in the dark underground, as bright light causes them discomfort. As they cannot, however, see perfectly in the dark, kobolds also have a great affinity for candles.[32]

Kobolds are cowardly and flee from most combat. Nonetheless, they are tenacious and fierce when cornered, so when their lairs (or candles) are threatened, they attack with abandon. Unfortunately for them, they are not particularly intelligent and their tactics leave much to be desired: though they are naturally stealthy, they use this ability for escape more than ambush, and they usually try to overwhelm opponents with large numbers rather than defeat them using strategic cunning. Further, kobolds are sometimes so cowardly that they refuse to help their friends when they fall under attack nearby – these craven creatures will simply go about their business (sweating in fear all the while) and hope that the troublesome adventurers will leave them alone.[33]

Kobolds trade the gold and other minerals they unearth to goblins and other patrons for all the goods they need to survive; occasionally they purchase protection as well. They will take over abandoned mines and scavenge equipment whenever they can do so safely.[34]

Kobolds stand between three and four feet in height and weighing between 70 to 100 pounds. The wiry creatures bear as much of a resemblance to a rat as it does to a humanoid and move with a rapid, hunched gait. Its nervousness is evident in its large, rodent-like eyes. This small, rat-like humanoid has a long snout. White hair pokes from beneath a ragged cap, on which perches a dribbling white candle. It hoists a leather pack over its left shoulder and a mining pick over its right. Its eyes glitter with wariness.[32] 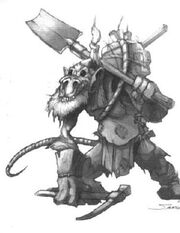 As depicted in the Manual of Monsters.

Kobolds form loose clan lineages based on bloodline. There is nothing like marriage. Young individuals migrate between nests or between larger warrens. Kobolds of all ages prefer to sleep in large groups. While there is no overt structure of government, kobolds organize in loose groups to plan out digs and scavenging. While not particularly bright, kobolds have keen senses and a good ability to read situations.

One of their significant accomplishments is their alliance with the harpies. Kobolds offer equipment they scavenge in return for information. The two races protect one another by proximity. Kobolds first try to avoid combat if at all possible. Traps are used to gather small food animals and protect their warrens. When pressed, kobolds will flood over a target, looking to bite at vulnerable points. When facing a significant threat, they will abandon their nests and young. The race's knack with stealth and comfort in underground environments makes it well suited to the rogue and scout classes.[34]

Many kobolds wear helmets that sport lit candles. These serve as more than just light sources, for kobolds develop an attachment to their candles and the light they shed. When a kobold wears or holds a lit candle, it gains morale. However, it doesn’t take much to extinguish one of these candles.[35]

Kobolds prefer to remain among their own kind. Many have a fear of the world above ground and of the races that live there. They are comfortable with their existence in the mines, chipping away with their picks and admiring each other’s candles. Kobolds must deal with a frightening number of enemies, being generally weak, and gifted kobold fighters who are able to protect their people rise quickly to the fore. These leaders are usually rogues, warriors, or healers. Rarer are the exceptional kobolds that leave their tunnels behind, striking out on a life of adventure. Most of these have a wanderlust they cannot otherwise sate; others feel the pull of riches more keenly than their brethren, and realize that adventure may be the best way to get what they need.[35] Friendly kobolds are possibly raised by night elves or some other race. Though ruled by fear, heroic kobolds emerge from time to time.[34]

There is evidence that the kobolds have a possible primordial connection to the beginnings of Azeroth, evidenced by their involvement in the imprisonment of the elemental princess Myzrael in the Arathi Highlands. This may or may not have a connection to their rumored trogg ancestry.