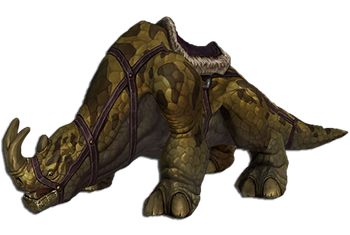 “The kodo is the backbone of our people. Wherever the Horde goes - in trade, settlement, or war - there you will find the mighty kodo.”

The kodo or kodo beast (sometimes pluralized as kodos)[2][3][4] is a large omnivorous herd animal native to the Barrens. The tauren hold these reptilian[5] creatures in high esteem, and breed them as mounts. They are also used extensively as pack animals by both the goblins and the Horde as a whole. The Blackrock clan are also known to use war kodos. 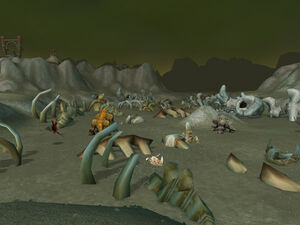 Kodo are massive reptiles with hardly visible scales[6] and thick leathery skin that ranges in color from sandy brown to black. Most kodo have a large horn that sprouts from their nose, and some are even covered in woolly hair.[7] Kodo range across central Kalimdor, but are particularly prevalent in Mulgore, after they were brought there by tauren during the Third War,[8] where the rolling grassy plains are particularly suited to their omnivorous nature. Wild kodo are normally herbivorous, however, and will not attack unless threatened. In the waning years of their lives, kodo instinctively trek to the Kodo Graveyard in the center of Kalimdor, where they spend their last hours. At the Kodo Graveyard there are even Kodo Spirits that have passed over to the spirit realm.

Tauren legends abound regarding the great horned kodos of Kalimdor’s Barrens. Some myths tell of rare kodos that are bound to the spirits of the sky and storm, thus allowing the colossal beasts to harness the powers of lightning itself. While kodos are generally considered gentle by nature, they are fierce opponents when threatened and have occasionally been known to devour their enemies whole.[9]

A kodo can eat its own weight in grass each day, but a lot comes out the other end.[11]

Kodos of the Horde

During the Third War, the orcs received a pack of tamed kodo beasts as a gift from Cairne Bloodhoof in return for Thrall's generosity.[12] The colossal kodo beasts of the Kalimdor plains then became valued allies of the orcish Horde. The mighty beasts were charged with carrying the orcs' pounding war drums into battle. The huge kodos, serving as symbols of orcish might and valor, also use their enormous size and strength to scatter enemy forces. When enraged, kodos are fond of devouring their enemies whole.[13][14] The orcs now tell fables about the kodos.

Months after the Battle of Mount Hyjal, kodos in Mulgore were killed by Stonetalon harpies and their meat was left to rot. They were avenged by Rexxar sent by Tagar.[15]

Bred for their aggressive, unpredictable demeanor by the Kor'kron stablemasters, the Black War Kodos' trumpeting call signifies that blood will soon be shed.[16]

Besides the Horde, Zandalari trolls and mogu used kodos in the Vale of Eternal Blossoms on Pandaria.[17] It's not stated whether they were native or brought from elsewhere by the trolls. 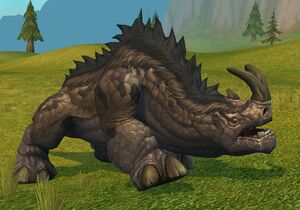 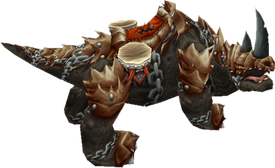 Kodos are the racial mount of the tauren. Swifter and slightly smaller than their wild cousins, kodo mounts nevertheless demonstrate the same resilience and fearlessness found in their untamed brethren, traits that serve them well when bearing their equally resolute riders.[18] The epic kodo mount can be bought at Bloodhoof Village. The PvP kodo is the

[Black War Kodo]. Epic kodo, unlike their slower cousins, have two rhino-like horns on their snout instead of just one. They also carry war drums that hang from the sides of their saddles, as they did when they served the orcs in battle. The

Kodos are tamable by hunters as part of the Scalehide family, along with ankylodon, mushan, stegodons and thunder lizards. 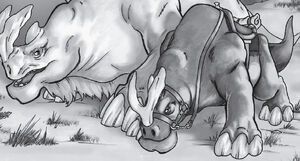 A kodo beast and riding kodo. 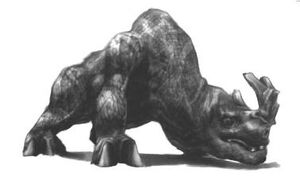 As seen in Manual of Monsters.

The giant, slow-moving kodo of the Barrens are one of the most intriguing species of Kalimdor. Though gentle and ponderous by nature, these mighty beasts become fierce enemies when threatened or attacked. Many kodo hold a special bond with the benevolent tauren race. It is said that some rare kodo are bound to the spirits of the sky and storm. Thus, the tauren have legends about those they call lightning lizards, salamanders (not the flamewaker creatures), thunder lizards, and storm walkers. Whether or not these behemoths actually have supernatural powers remains to be seen. If one is discovered, it should be approached with extreme caution. It is said that these thunder lizards are much more hostile than their more common cousins and will attack without provocation.

Giant grey reptilian quadrupeds, the kodo beasts wander the plains in thunderous herds. They graze primarily on quick-growing grasses, but will eat the leaves of shrubs and trees they encounter. Like many herd animals, kodo beast groups are composed of mothers and young, led by a single powerful male or female. A few younger males may be present, but they are eventually driven out to establish their own herds. Though terrifyingly large and powerful, kodo beasts are by nature quiet, lumbering animals. They are content simply to wander away from potential threats. One notable exception is when they are protecting eggs or yearlings, which are small enough to be threatened by most predators. Kodo beasts form rings around the young, barring attack with simple mass. Sufficiently annoying opponents are charged and swallowed whole. More significant threats, particularly those too large to swallow, are run down. Kodo beasts are key to tauren culture. Tauren hunt and use every part of kodos for their equipment, clothing, and food. Kodo beasts can be trained and are used as beasts of burden by the tauren and as mounts for orcs.[22][23]