The Kolkar clan[1] or tribe[2] is one of five clans of centaur native to Desolace, having settlements in the Barrens and Desolace, and formerly holding Kolkar Crag in southern Durotar. The founding leader (Khan) of the Kolkar was Kolk, an alleged son of Zaetar and Theradras and first of the centaur Khans, later the clan was led by Khan Dez'hepah and his officers, until his death. The clan, or what remains of it, is currently led by Khan Leh'Prah.

The Kolkar clan holds no alliance with their brother tribes, and constantly warring with the Horde, Alliance and other centaur alike.

During the tauren struggle to reclaim their ancestral lands of Mulgore leading up to the Third War, the Kolkar of the Barrens were the main aggressor preventing the nomads from reaching their homeland. It is also likely that the Galak clan fought against the tauren during these same events.[citation needed]  After the tauren and their orc allies' victory over the hostile centaur, the Khans were left with nothing more than further hate towards these invading enemies, throwing all three races into an endless struggle to maintain the land.

Around the time of the Invasion of Durotar, Kolkar Khan Gragtor tore an orc village in Dustwallow Marsh asunder and took several orcs as unwilling slaves to do his bidding. Rexxar found the centaur camp and orc captives locked in cages. Rexxar razed the centaur camp to the ground and cut khan to pieces.[3]

When the demons that have been pouring into the area forced the Magram clan from their land in the south, the Magram moved north and defeated the Kolkar clan taking the land for their own. Only a few Kolkar centaur survived, though most that did were captured by the Magram. Khan Leh'Prah was left for dead near the border to village, which is now known as Magram Territory.

Some time after the Cataclysm, the Kolkar and other clans of centaur joined under the new High Khan. 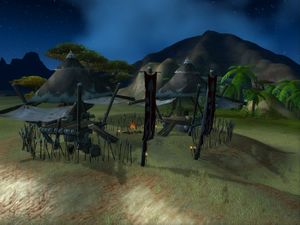 The Kolkar have a presence in all three oases in the Barrens: The Stagnant Oasis, Lushwater Oasis, and The Forgotten Pools. Command tents and small camps can be found scattered all over the edges of the lush overgrowth surrounding these pools, identifiable by their large tribal flags. Patrols of centaur and semi-domesticated hyena control the perimeters of these settlements. 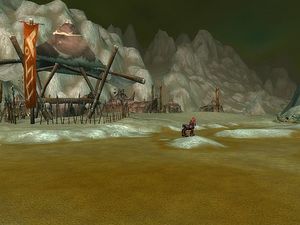 A Kolkar settlement in Desolace.

The Kolkar clan also has representation in the traditional home of the centaur, Desolace.

Khan Dez'hepah is the leader of the Kolkar Village located in the eastern parts of the zone near the mountain range bordering Mulgore. It is likely this was historically the first Kolkar settlement, founded by Khan Kolk, due to its size and proximity to Maraudon.

The restless spirit of Khan Kolk can still be found wandering the halls of Maraudon.

The Kolkar have recently set up a small forward outpost in the orcish region of Durotar, Kolkar Crag, which serves as headquarters for planned assaults against the Valley of Trials, Sen'jin Village, and even the capital city of Orgrimmar. Disruption of their raids is a duty left to inexperienced members of the Horde, with the aid of Lar Prowltusk's leadership. 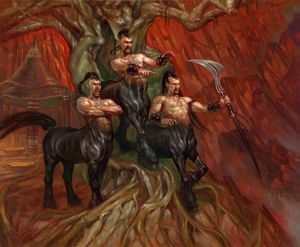 The Centaur Marauders who were present in the Barrens during the Third War, may have been a sub-force of the Kolkar.