From Wowpedia
(Redirected from Koltira)
Jump to: navigation, search

"Come then, you ragged sacks of flesh. Come and learn what it takes to slay an elf."[2]

Koltira Deathweaver is a notable death knight of the New Horde, serving as the Horde counterpart to Thassarian. In life, Koltira was a valiant defender of Quel'Thalas, and took to the field during the brutal Scourge invasion. He was killed in battle by Thassarian, and was promptly reanimated as a powerful death knight under the Lich King's sway. Despite Thassarian being his killer, Koltira came to develop a strong bond with the human, the two placing inordinate amounts of value on the safety of the other (for ruthless death knights of the Scourge), and considering each other brothers in death.

Along with many other death knights, Koltira broke away from the Lich King's grasp when his free will was restored to him at the Battle for Light's Hope Chapel, and he joined the newly-formed Knights of the Ebon Blade under Highlord Darion Mograine. While Thassarian opted to join the Alliance to reunite with his sister and serve his king, Koltira—conversely lacking such purpose with his own monarch and family dead—chose to join the Horde, the faction his people (renamed the blood elves in honor of the fallen high elves) were now a part of. 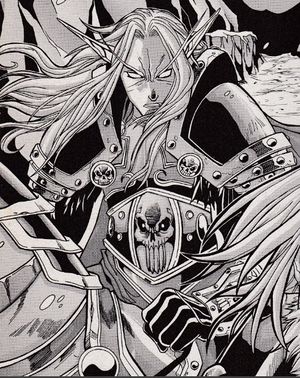 Koltira's first encounter with the death knight Thassarian was during the defense of Quel'Thalas against the impending Scourge invasion, where he was defending An'owyn with his brother Faltora and the high elf Merriel. Merriel was quickly slain and Faltora charged Thassarian directly, only to be quickly beaten. Koltira noticed however, that Thassarian hesitated in killing him. While attempting to flee, Faltora was killed by an abomination, but Koltira managed to escape.

Several hours later, Koltira followed and ambushed Thassarian. Feeling the conflict inside Thassarian, he offered Thassarian the choice to turn away from the Scourge and join him. Thassarian refused but spared his life until the next time they meet. The next day, the elfgates failed and the Scourge entered Silvermoon where Koltira and Thassarian continued their duel. Thassarian emerged victorious and took Koltira's life. Koltira was then raised as another death knight of the Scourge. Despite being his murderer, Thassarian and Koltira developed a bond during their service under Arthas and came to see each other as brothers.

Years later, Koltira and Thassarian were ordered by the Lich King to join Highlord Darion Mograine's forces in crushing the Argent Dawn at Light's Hope Chapel using the necropolis Acherus. Thassarian, Koltira and Orbaz Bloodbane were stationed at Acherus: The Ebon Hold. Their first mission was to go behind enemy lines and find out what they could about the Crimson Dawn. During the process Koltira got captured and Thassarian was willing to break the Scourge code concerning the weak to free him.

At the close of the Battle for Light's Hope Chapel, in a confrontation with the Lich King, Tirion Fordring cleansed the Ashbringer and freed the Knights of the Ebon Blade from the Scourge. Koltira and Thassarian parted ways, with Thassarian joining the Alliance and Koltira unable to decide if he should join the majority of his people, now the blood elves, in the Horde, or follow Thassarian into the Alliance. After Thassarian told him to go with his people, Koltira decided to join the Horde, enlisting at Agmar's Hammer to Overlord Agmar. He was allowed to stay but he realized that he is being hunted by shadows.

Koltira later journeyed to the Horde fortress of Agmar's Hammer, where he charged Horde members with powering his runeblade and striking against the local Scourge threats. Later, he was aiding the Horde while on Orgrim's Hammer, dispensing missions against the Lich King's power bases in the area.

[80] Tirion's Gambit, arriving in time to battle Arthas himself and relieve the Argent Crusaders of their unfavorable predicament. After Tirion destroyed what remained of the Lich King's heart, Arthas was temporarily wounded, and Koltira was in favor of finishing him off on the spot. Darion was more in favor of patience, and the Knights of the Ebon Blade pulled back. 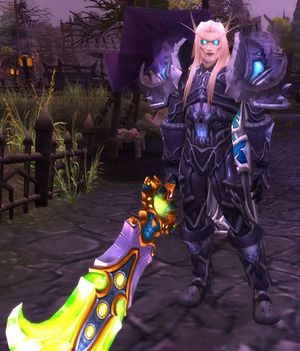 Following the Cataclysm, the Alliance and the Forsaken began fighting with each other and the Scourge over control of Andorhal in the Western Plaguelands. The Alliance, led by Thassarian, took control of the western portion of the town while the Horde, led by Koltira Deathweaver, took control of the eastern portion.[3] Over the course of the Battle for Andorhal, Koltira sends Horde heroes to deal with the remaining Scourge forces and, after defeating them, Thassarian and Koltira enter a truce. Despite this apparent ceasefire however, some time afterwards, human farmers formed a militia and launched a sneak attack on Koltira's Forsaken forces. Koltira begins to fend the Alliance forces off, and instructs the player to locate Lindsay Ravensun, whose input Koltira had been somewhat dismissive of earlier.

Upon meeting Ravensun, it is revealed that she is, in fact, none other than the Dark Lady herself in disguise. She sends Horde agents and Val'kyr to assault the Alliance forces and turn the battle around. After the Alliance is defeated, Sylvanas confronts Koltira about the truce with Thassarian, and scolds him for being weak. A portal to the Undercity is opened and Koltira is pulled through by a hooked chain, where Sylvanas will attempt to purge him of his compassion for Thassarian and make him more of a servant of the Horde - more specifically, a servant of Sylvanas and the Forsaken.[4]

Over the years since Koltira was imprisoned, the Ebon Blade made several attempts to negotiate with Sylvanas for his release, but she refused them all.[5] Whether he knew of this of not, Koltira never gave up hope that his order was trying to free him.[6]

With the third invasion of the Burning Legion threatening all of Azeroth, Thassarian made a personal request of the order's new Deathlord to help him rescue Koltira from the Undercity.[5] Koltira is successfully broken out of the Apothecarium after the Deathlord assisted Thassarian in fighting through the guards. He remarks afterward that he'd rather not talk about his captivity, and wants to focus on the invasion instead.[6]

While in the service of the Lich King:

Koltira aboard Orgrim's Hammer in Icecrown. 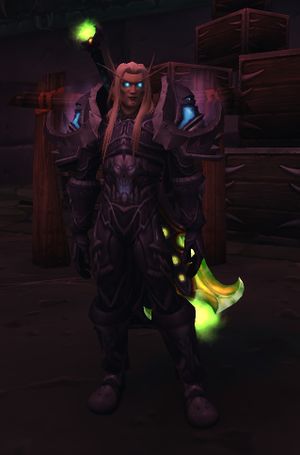 Leave... I have nothing to say to you.
Greetings

Why Koltira would find himself fighting for his "queen," Lady Sylvanas Windrunner, is curious, as his stated reason for joining the Horde was to reconcile with his people, now calling themselves the blood elves, and to fight once more for Quel'Thalas. Though not directly addressed as of yet, one of the following may have been a factor:

It is also unknown if Koltira still considers himself a member of the Forsaken after his imprisonment in the Undercity.

Since Thassarian is canonically the character who completed the quest

[55] Where Kings Walk, Koltira may be the one who completed the Horde equivalent,