Get a Crushblow Wind Rider squad from Jon-Jon Jellyneck and then escort them to the drop off point in the Twilight Gate.

Garona and a detachment of the Kor'kron are here to assist us with operations up top in the Twilight Citadel. I need you to escort them there.

I've called upon a local tribe of trolls to give us a lift in with their wind riders. The assassins have some things that they need to do down in the Twilight Gate area first, though.

Speak with the troll chief, Jon-Jon Jellyneck and get yourself a detachment of Kor'kron to drop off. You'll fly them in. A big red X marks the spot.

That must have been exciting.

Despite any losses that the Kor'kron may have incurred along the way, no one will be able to doubt their effectiveness, nor that of Garona. And with you in the mix, it's only a matter of time before victory is ours.

Pick up Ogres & Ettins and Call in the Artillery before heading out.

Jon-Jon Jellyneck stands next to the flight master. Talk to him:

Jon-Jon, I'm here to lead your wind rider squad and drop off the Kor'kron assassins.

Hey, why not you say so? Give dem Twilight's the ol' one-two, den ya comin' back here an' we party!
I gots me a sweet lil' place down on dey beach with me lady. You comin' by!
A squad of Crushblow Flyer flies in.

on the northern part of the gate. Then start killing and marking. 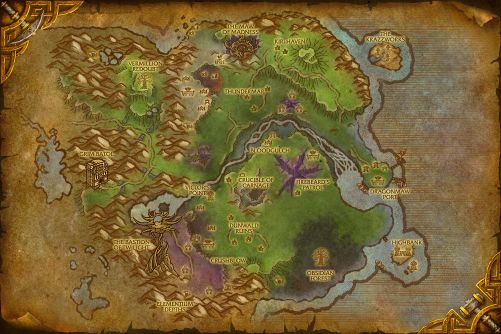