From Wowpedia
(Redirected from Kor'kron Guard)
Jump to: navigation, search

The Kor'kron (or the Kor'kron Guard[1] / Kor'kron guard)[2][3][4] are an elite fighting force of the Horde, serving as the personal bodyguards of the Warchief and enforcers of their command.[5] They are stationed in many areas, including the Warchief's own fortress of Grommash Hold in Orgrimmar.

The Kor'kron were originally an elite band of orcs that served as Thrall's bodyguards.[6] They seem to be an order that Thrall revived.[7] They (with one exception) are fiercely loyal to whoever is leading the Horde, not any particular individual.[7][8]

Under Garrosh Hellscream's regime, the Kor'kron greatly expanded in power, albeit narrowing its racial composition down to almost universally orcs. They served as the Warchief's primary soldiers during the Siege of Orgrimmar, until Hellscream's forced removal from power. The Kor'kron sustained heavy causalities during the siege, including the death of its leader, Malkorok, and several other celebrated generals. With Vol'jin's ascension as Warchief of the Horde, the surviving Kor'kron were placed in prisons, save for those who had defected such as Gakkorg.[9]

During the Burning Legion's third invasion of Azeroth the Kor'kron seem to have returned, as several members can be spotted in the ranks of the Horde again. 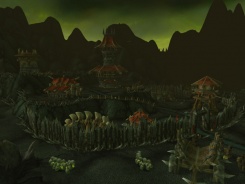 A Kor'kron Guard regiment is based at Shadowmoon Village.

A detachment of Kor'kron have also been dispatched to Outland where they serve as the defenders of Shadowmoon Village in Shadowmoon Valley, the closest Horde outpost to the Black Temple. From there, they wage war against the Burning Legion as well as the legions of Illidan Stormrage.

More recently the Kor'kron have been deployed in Northrend in full force[10] as part of the Horde Expedition. The fortress at the base of Angrathar the Wrathgate is called Kor'kron Vanguard and is commanded by Dranosh Saurfang. In many ways they seem to be the Horde counterpart of the 7th Legion. Both groups consist of their faction's elite forces, and both are heavily involved in their faction's campaign in Northrend.

During the war against the Lich King, Thrall sent a legion of Kor'kron under Bragor Bloodfist to the Undercity to replace the Forsaken forces deployed to the front lines in Northrend; after the events of the Wrathgate, they were tasked to keep an eye on the Royal Apothecary Society to ensure that they discontinued work on the New Plague.

Overlord Agmar led the warriors of the Kor'kron on the Isle of Conquest, where they fought the 7th Legion under the command of Halford Wyrmbane.

The Kor'kron under the command of High Overlord Varok Saurfang fought their way through Icecrown Citadel at the side of the Ashen Verdict and engaged the 7th Legion in an aerial battle between the Orgrim's Hammer and the Skybreaker outside of the citadel.

With the coming of the Cataclysm, Varok Saurfang remained in Northrend as commander of a skeleton crew in Warsong Hold.[11] They also have minor involvement in the Twilight Highlands against Cho'gall's forces. They're involved in many of the recent events of the Alliance-Horde war, serving as counterparts of the 7th Legion.

Kor'kron warriors also accompanied the newly-appointed Warchief, Garrosh Hellscream, to Mulgore to fight against the quilboar.[12]

Later, just prior to the Ashenvale war, six Kor'kron guards accompanied Garrosh to Bilgewater Harbor to meet with Briln.[13] Later, they accompanied him to Ashenvale to attack the Alliance. At some point during the ferocious battle, one guard warned Garrosh of the danger the Alliance posed. King Varian Wrynn also managed to kill two soldiers. As the Alliance pushed the Horde, Kor'kron guards realized that the battle had been lost, and went to hold and convince the battle-thirsty Garrosh to retreat.[14]

Most recently, Garrosh Hellscream granted the Blackrock clan amnesty and a formidable amount of them can be found in the Horde.[15] The new leader of the Kor'kron, Malkorok, was also a Blackrock orc. They served as some kind of secret police force to Garrosh, punishing anyone who questions the warchief.[16]

Two months after the mist collapsed, Garrosh Hellscream, accompanied by his Kor'kron, arrived with the bulk of the Horde fleet and oversaw the construction of Domination Point. However, Garrosh had another clash of opinions with Vol'jin. Garrosh ordered Vol'jin's outright murder, sending him off on a mission with the Kor'kron and one of Garrosh's assassins. Vol'jin survived the attempt on his life, and it was revealed that Garrosh put the Echo Isles under martial law, sending his Kor'kron forces to round up the Darkspear trolls. However, Thrall and Horde adventurers traveled to the Echo Isles and freed them from their control by killing enough Kor'kron so the Darkspear could overwhelm the rest and take them prisoners.

[Divine Bell]. After Garrosh learned of the location of the Divine Bell by Shan Kien, he tasked Blademaster Ishi with acquiring it. Ishi led a small force of Kor'kron into the Ruins of Korune where the bell is hidden, only to discover that the night elves had already found the bell and brought it to Darnassus.

Later on, Garrosh amassed Horde forces at Emperor's Reach with the Divine Bell, Malkorok and his Kor'kron in tow. Garrosh rang the bell, turning some of the present Kor'kron into Sha, as they could not control the power of the Divine Bell. The bell was then shattered during a showdown between Garrosh and Anduin Wrynn.

Some Kor'kron are also present at Domination Point, guarding the fortress.

They also participated in the Assault on Zan'vess.

Kor'kron Elite have taken over the job of guarding Orgrimmar and have an increased presence throughout town.[17] It's also been discovered that the Dark Shaman working in the Ragefire Chasm are a secret part of the Kor'kron.

The building conflict between Garrosh Hellscream's loyal Kor'kron and the rebelling forces of Vol'jin's Darkspear Rebellion augments in intensity. Kor'kron troops wearing what looks like a recolored Warsong clan tabard are now operating all over the Northern Barrens, suggesting that at least some Warsong members are also following Garrosh. Some Kor'kron soldiers may drop

[Indecipherable Plans], hinting at something darker going on...

The Kor'kron composed the Garrosh-loyalists' main army during the Siege of Orgrimmar, joining forces with the Dragonmaw clan to defend the city from the Alliance and the Darkspear Rebellion. Many Kor'kron were slain during the ensuing battles, losing ground to the invaders both above and beneath Orgrimmar. Both Malkorok and General Nazgrim lost their lives in the conflict, as well as many orcs within the Kor'kron's ranks.

Following Vol'jin's ascension as warchief, there were not many Kor'kron left due to most of them having sided with Garrosh, and the handful of survivors were all in prisons (save for defectors such as Gakkorg). During Garrosh's trial in Pandaria, Baine Bloodhoof noted that Vol'jin had not yet selected his own special guards but that they would likely include more than a few trolls.[9]

At the start of the war in Draenor, all of the Kor'kron guards in the Undercity left, leaving only Bragor with the new title of "Hand of the Warchief". Under odd circumstances, the body of Overseer Kraggosh is now found in a cage.

The Warspear Mine Guards on Ashran in Draenor wear the Kor'kron tabard.

One orc with the Kor'kron tabard was seen at the funeral ceremony for Vol'jin seen cheering for his successor, Warchief Windrunner.[18]

During the Burning Legion's third invasion, they became a recruitable option for the Valarjar after the freeing Eitrigg,[19] and a pair of Kor'kron Headhunters can be seen on board The Sunstrider, escorting Lady Liadrin, Aethas Sunreaver and the adventurer on their venture towards Azuremyst Isle to join the invasion of Argus.[20]

Following the end of the Argus Campaign, the Kor'kron continue to act as elite orc guards of Grommash Hold.[21]

Please add any available information to this section.
Kor'kron members appeared during the events of the Fourth War. Commander Mokor trained Horde soldiers in Dazar'alor and Lieutenant Akaro participated in the Battle for Stromgarde.

Two Kor'kron guards, a blood elf, and two jungle trolls were seen escorting a shipment through Darkshore woods to the Horde encampment. With the exception of one of the trolls, they were all killed by Malfurion Stormrage and Tyrande Whisperwind.[22] 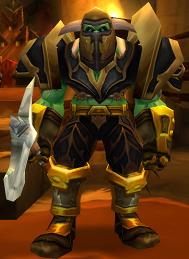