Not to be confused with Kor'lok (Traveler).

Kor'lok is a level 102 elite ogre mage who joins the battle in Ashran. Seemingly the spirit of a mighty ogre king, Kor'lok awaits at the Seat of Kor'lok in eastern Ashran for players of either faction to prove themselves worthy of his aid in battle by defeating his bodyguards Muk'Mar Raz and Gaul Dun Firok.

For details on Kor'lok's involvement in the battle of Ashran, see Ashran.

Over time Kor'lok gains stacks of Curse of Kor'lok, increasing his damage taken.

Awakening
I have returned! Submit, peasants, to the might of the great Ogre Empire!

Recruited by Alliance
Little blue warriors, you have proven yourself worthy of avoiding my wrath.

Recruited by Horde
The red ones, yes, they will bear witness to my devastation!

Death
The empire... will rise again! 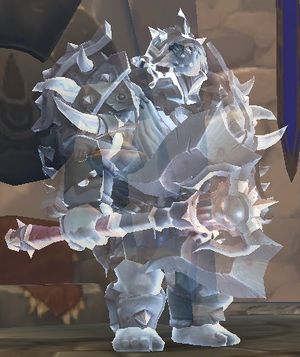 Awakening
I will fight for the side that proves themselves worthy in battle. Come, my bodyguards await you!

Recruitment by Alliance
Well done little blue soldiers. Come, I will handle these little red rodents for you.

Recruitment by Horde
Well fought red army. The time has come for me to crush these blue insects for you.

Judging by his title, he may have once been an imperator of the Gorian Empire.