Koristrasza is a red dragon found in Razorfen Downs. She appears near the entrance after players zone in.

She first arrived here after the Cataclysm.

Since the war in Draenor, she returned to the Downs once again as the phylactery of Amnennar wasn't destroyed. As a dragon she battled against the Death Speaker Blackthorn who was working on a way to bring the lich back. When the quilboar was killed, Amnennar rose once again. After the lich was killed, his phylactery was taken by Koristrasza to the red dragonflight to find a way to destroy the object. 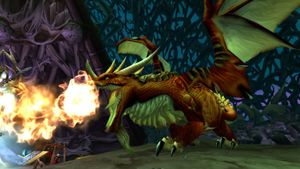 The subject of this section did not make it out of the beta stages of Cataclysm.

Heroes, I require your aid!

You are good to have come so quickly. I'm afraid I must ask you to put your lives in danger again to save Kalimdor.

Amnennar's apprentice, Death Speaker Blackthorn, hopes to return his master to the realm of the living! We must quickly make our way atop the Spiral of Thorns and defeat him before the ritual can be completed.

We must strike together, only with our combined force can we hope to stop him!

I thought Amnennar was destroyed.

I too thought Amnennar the Coldbringer had been defeated; a grave mistake indeed. How clouded my judgment must have been to forget the true power of a lich lies in the phylactery.

A powerful necromancer such as Amnennar can store his soul in a physical vessel, allowing himself to be reborn if the proper rituals can be completed.

I should have searched across Kalimdor for Amnennar's Phylactery, but I was too prideful in our previous victory.

Now, all of that work may come undone.

Skeletons assault you constantly and plague roils out of the caves. How can I help stop the ritual?

I know Death Speaker Blackthorn's newest creation, Mushlump, spews forth plague from every pore and he has reenlisted Modresh Fire Eye's help in rallying the undead.

Even the Death's Head has been helping Blackthorn. Their Arachnomancers have created a monstrosity of fang and plague, a spider of enormous size named Aarux.

If you could defeat these enemies and clear the plague blocking my path we could climb the Spiral of Thorns to defeat Death Speaker Blackthorn and recapture Amnennar's phylactery before it is too late.

You've done it! The plague preventing my access has been disrupted and we can now begin our final push to disrupt Death Speaker Blackthorn's ritual. Lead on if you are ready to begin.

Thank you brave heroes. Without your help Amnennar would have returned to Azeroth and brought untold horrors with him.

I will return this dangerous artifact to my brothers and sisters of the red dragonflight. Perhaps we can find a way to destroy it.

I am in your debt.

What brings you inside these cursed lands?