For the companion pet, see

Kovok is the kunchong pet and partner of Kaz'tik the Manipulator. The mantid used to use force to control kunchong, but Kaz'tik realized that they were intelligent creatures and that his people didn't fully understand them. He thus bonded with a young Kovok and formed a partnership with the creature.

When Kaz'tik was chosen for encasement as a paragon, he didn't want to risk his experiment, so he studied the notes kept by Korven the Prime on his development of the preservation chamber. Kaz'tik was able to create a modified version that could preserve Kovok as well, and thus continue his experiment where he left off when he was called on by the Klaxxi in the future.

Kovok is awakened by his master Kaz'tik during Reunited. Kaz'tik informs the player that Kovok must grow to his original size if he is to be of aid against the Empress' armies. After being fed the Saurok in the area, Kovok begins to trust the Wakener. He later appears in Klaxxi'vess having grown to his full size. Kaz'tik then offers the daily quest Rampage Against the Machine where the player rides Kovok and uses him to decimate the Empress' army on the Horrid March.

Some time later, Kovok was brought to Garrosh's Underhold who obtained the heart of Y'Shaarj. Kovok accompanies his master during the Siege of Orgrimmar. He is required to be killed before the players can pull the Paragons of the Klaxxi. He has a strong cleaving attack so melee DPS should stay away from his front.

[Kovok] also has a chance to drop from the Paragons as loot, implying he may have survived the encounter and now wishes to follow the Wakener, the only one he trusted besides Kaz'tik. Alternatively, the pet could be a spawn from the slain. 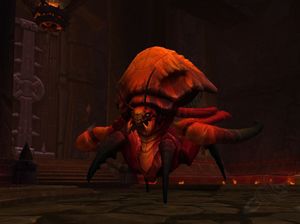 Chamber of the Paragons, Siege of Orgrimmar

Kovok is found in the Chamber of the Paragons during the Siege of Orgrimmar. Killing him reveals a crystal that when interacted with starts the Paragons of the Klaxxi encounter.

If a player abandons Kovok's two intro quests, their Kovok will show his heart breaking before running off to despawn.