From Wowpedia
(Redirected from Krag'wa)
Jump to: navigation, search

Krag'wa the Huge is a frog loa worshiped by the Zandalari. He can be found at Krag'wa's Burrow located in the Frogmarsh in Nazmir. Krag'wa is a physically powerful loa, able to leap long distances and use his weight and tongue to devastate scores of enemies.[2] He is also quite impulsive and demanding, requesting large amounts of offerings and food from his followers.[3] He appears to be the father of the dire toads that inhabit the swamps of Zandalar.

Krag'wa aids Talanji's Expedition against the blood trolls during the Nazmir storyline.

Crawgs are former tadpoles of the loa that have been corrupted by the blood trolls' blood magic.[4] Despite the corruption, he still cares about their safety even if he cannot remove the corruption.[5][6]

Krag'wa about to attack the blood trolls. 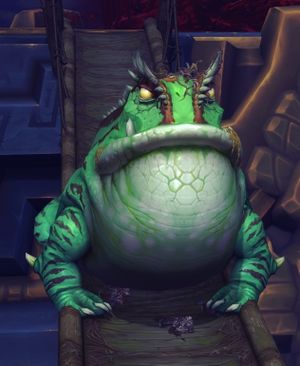 Krag'wa near the Heart of Darkness.

Krag'wa's followers used to bring him offerings of meat from around the Frogmarsh.[7] Long ago, when the trolls of Nazmir first began listening to the whispering darkness, Krag'wa stored some of his power in the totems that surround his lair for future keeping.[8]

As Krag'wa was unwilling to bend to the will of G'huun, the great frog came under attack by the blood trolls. They drained his children of their blood and planned to sacrifice Krag'wa himself.[9][10] They slew every last one of his worshipers in Nazmir. From all of this, Krag'wa was greatly weakened and had to be made strong again.[11] After restoring his power by eating a feast and releasing the power sealed in his totems, Krag'wa unleashed his fury on the blood trolls.[12]

The naga also attacked Krag'wa and his children, seeking to sate their addiction to magic by draining them[13] and his champions.[14] After the naga were dealt with, he accepted Shadow Hunter Narez as his follower.

The loa assisted his chosen aspect during the Battle of Dazar'alor.[17]

In accordance of the ritual of queens and kings, Talanji sought the judgment of the loa.[18] During the trial, Krag'wa tested how far Talanji would go to sacrifice for her people and her commitment to defend the weak.[19] 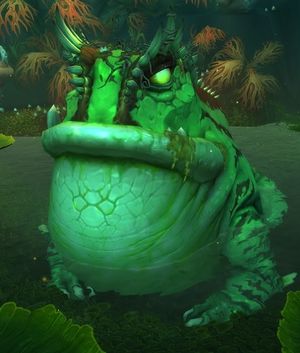 Krag'wa in World of Warcraft.

All de creatures great and small,
His protection will encompass all.
If sacrifice be ya whim,
Best look to yaself, not one of dem.


For those dat seek to care for others,
Ya find ya kin, sistas and brothas.
If ya be de one ya love da most,
To him ya surely should not boast.


With each word, he puts much weight,
No wasted thought, no hurried trait.
If ya be selfish, come not here.
De selfless have no need to fear.
Of danger he has seen no end.
Our faith and hope his greatest friend.

In the Hearthstone expansion Rastakhan's Rumble, Krag'wa serves as the patron of Krag'wa's Frogs, a spiritual but slightly bizarre team of troll shaman, and personally appears as a legendary shaman card. His flavor text reads: "Krag'wa has a ritual to honor his friends and a ritual to devour his enemies. No one can tell them apart."

Brann Bronzebeard speculates that gorlocs, and by extension murlocs, are descended from a frog Wild God.[22] If Krag'wa is a Wild God, then he might be this gorloc ancestor, similarly to how the quilboar descend from the Wild God Agamaggan.