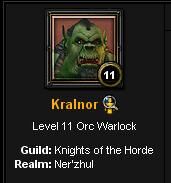 Kralnor is the name of an orc warlock player character in the popular MMORPG World of Warcraft. His fame began when he posted a thread called "Warlock staff users" in the Warlock Forums of the Blizzard website May 16, 2005. The post asked readers to post information about the two-handed staff they preferred to use in the game. This idea was nothing new, however the manner in which Kralnor asked the readers to post was original. Since his last post, he has become a level 48 warlock, but has not logged in for some time. Similar posts include Alamo for druids, Mellin for paladins, and Halbrium for shamans.

The original post was fraught with grammar and spelling errors. It was also extremely vague and alluded to Kralnor getting in trouble somehow by being reported. It lacked any information about his own staff, yet did contain a comment about proofreading. The original post is as follows:

I dont like to stress the fact that the warlock rocks, but he jus does,So, for all you staff users out there, feel free to come in and post, my staff is a good one, but here is how it goes
1. post message in the room
2. LOOK IT OVER
3. dont report anything, i might get in trouble :)
and 4. Have fun!!!

This simple post spawned a long thread of replies. At first, readers didn’t know how to respond to this post. Several posted their staff and simply moved on. Many flamed Kralnor for his spelling and the post’s lack of meaning or sense.

Kralnor later responded to all the questions with:

The thread generated over 100 pages of posts. Once the thread hit 46 pages, many readers were unable to view any following pages due to a bug in the forum. This did not prevent users from posting or simply "bumping" the thread to the main page of the forum. Warlocks composed songs and poems, speculated about the poster, made websites and even T-shirts. Kralnor never posted to the thread again after his initial "GET... OUT" reply. When the thread was finally deleted from the forum, it had been responded to well over 1,200 times. Warlocks have adopted the cause of petitioning Blizzard to add an extremely powerful staff that references Kralnor in the title. 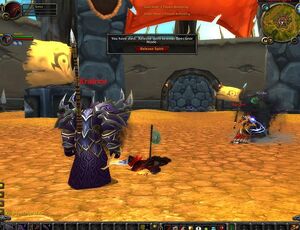 Kralnor, immortalized by Blizzard in this sneak-peak screenshot of the Arena

There are 5 known Blizzard responses to this cultural phenomenon.