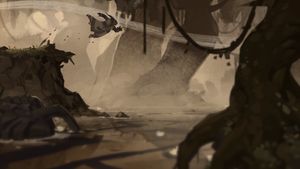 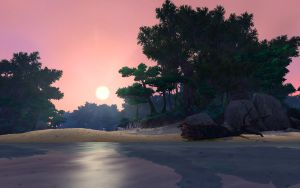 “Once home to a sprawling mogu port, the dense Krasarang Wilds stretch along Pandaria's southern shores. Most pandaren avoid this shadowy place and its dangerous inhabitants, but groups of intrepid fishermen have been known to brave the wilds and ply their trade in the area's bountiful coastal waters.”

— The Art of World of Warcraft: Mists of Pandaria, pg. 79

The Krasarang Wilds along Pandaria's southern coast conceal many ancient secrets of a lost dynasty that have drawn the attention of prophecy-seekers among the Alliance and Horde. The Wilds are also home to the vicious, domineering mogu, and a more insidious danger still: the Sha of Despair is believed to have escaped from its bindings in the Temple of the Red Crane, and stifling gloom has begun to blanket the land in its path.

In Patch 5.1.0 the beach on Krasarang Wilds erupted into a battlezone, full of Alliance and Horde siege machines.[1]

During the time of mogu dominion over the ancient Pandaria, this lush rainforest marked the far edges of their infamous empire. Here, the rebellious saurok have made their home and fought against their former masters, bent on the total genocide of these reptilian creatures. Countless years have passed, yet the efforts of the mogu were never successful and Emperor Dojan II was ultimately slain by the saurok assassins, leaving the empire in disarray, while the saurok have disappeared into the wilds and inhabit this region ever since.

It was once home to a sprawling mogu port.[2]

Some time after the Great Sundering, an explorer named Liu Lang has ventured beyond the mists created by the sacrifice of the last pandaren emperor of Pandaria, Shaohao. During that time it was believed that the rest of the world was destroyed by the catastrophe, and Liu Lang's wanderlust was laughed upon while he left on the back of Shen-zin Su from the Turtle Beach. He eventually returned and denied the myth of the world's destruction and gained more followers every time he came back and forth. When he stopped returning, a statue commemorating his accomplishments was placed on the beach. Nowadays, the wilds are still a dangerous place, roaming saurok ambushers, wildlife and the increasing Sha presence pose a serious threat to anyone that will find himself wandering through this beautiful, yet treacherous place.

Krasarang Wilds can be accessed on foot via Zhu's Descent from the eastern side of the Valley of the Four Winds, via Dustback Gorge in the shadow of the Serpent's Spine on the west side of the valley, or by swimming across from Paw'don Village in the Jade Forest.

The only true grasslands to be found are just down the slope from the Valley of the Four Winds, near Zhu's Watch. These gently rolling hills soon dissolve as they are overtaken by the thick jungle that blankets most of the inland region. Thick trees draped with vines can be found around every corner, and a handful of rivers wind their way through the moss and ruins that dot the landscape. The Cliffs of Despair serve as the northern border to the Wilds, while sparkling beaches and island-studded waters comprise the south.