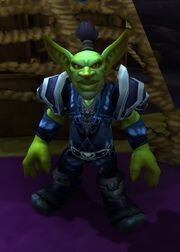 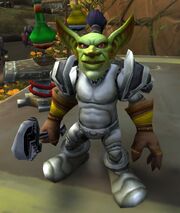 In Warlords of Draenor.

"The more we see of pain and blood, the more the coin will rain and flood!" [2]

Krixel Pinchwhistle is a goblin who sells vintage Alliance Mail and Plate PvP gear in Area 52 in the Netherstorm. In order to purchase from him you must have the appropriate Feat of Strength from the old PvP ranking system (eg:

Krixel is a former arena vendor that used to (somehow) be simultaneously located in Orgrimmar, Stormwind City, and Blade's Edge Mountains between patch 2.1 and patch 2.3.

He also appears in Spires of Arak on Draenor where he crash-landed and began working on a serum for the infested goblin until he broke his leg. With the help of the adventurers and his niece Kimzee he finished his job and returned to Pinchwhistle Gearworks.

He is also seen in Frostwall and Lunarfall's Trading Post.

Forget Vixton's spread. You want the good stuff? You talk to Krixel here. I got just what you need, provided you got the right rep. You know, in the arena. This stuff isn't for sissies, kid.