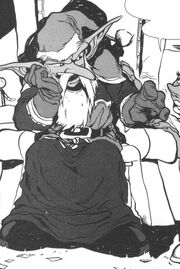 Krizz is a character in the story A Very Smokywood Winter Veil told by Wulmort Jinglepocket during the Smokywood Storytime.

Krizz is a very unlucky goblin, because Baron Revilgaz kicked him out of Booty Bay because he did not help a client. Eventually he could not get a job neither in Gadgetzan or Mudsprocket and Everlook. But while in Everlook he was offered to work as a merchant during the Feast of Winter Veil in Ironforge. Everything went well, until the last night; Winter Veil Eve, where Greatfather Winter has been drinking too much and has passed out. Because of Krizz's height he was the only one who fitted in Greatfather Winter's clothes and had to take the dwarf's place, and listen to all the children's wishes. During his time as Greatfather Winter the young gnome Fala Fizzlesprocket told him her wish; to get her daddy, Fritz Fizzlesprocket, back home. He had to agree, but he knew that he could do nothing.

After the day was over Krizz wandered Ironforge, and was met by a mysterious dwarven stranger. The stranger mistook him for the original Greatfather Winter, and told him to meet him at the Ironforge Airfield right before midnight in order to get a special toy made by a tinker for tomorrow's presents giving. Eventually, as the stranger left, Fala told Krizz that the stranger spoke with Fritz the evening that he disappeared. Krizz realized that the mentioned tinker and Fritz is the same person and that something bad is about to happen. Krizz eventually asked Metzen the Reindeer to carry them to the airport. As they arrived, Krizz immediately attacked the dwarves, successfully and freed professor Fizzlesprocket and other gnome captives. Fritz then retold his story. He was forced to create a giant robot with Greatfather's clothes. The robot would be used to "took" presents for delivery. However, in those gifts were treasures from the Explorers' League and the Royal Treasury stolen by the dark irons. Thanks to Krizz, the plan was foiled.

He then turned to leave as pilots could took the gnomes home. As he was about to hop on Metzen, he told him that he was fired out of Booty Bay, because he did not want to help the client as it would result in murderers. Metzen seemed to like the goblin. Right then Fala revealed him that she knew he was not Greatfather as no Greathfather has goblin's ears and thanked him for saving her father. Fritz then invited Krizz for Winter Veil Eve dinner. He accepted and even carved the roast boar.

Everything seemed all right - stolen presents were returned and children got their gifts. And the giant robot decorated the tree.[1]