Krol Blade is a main hand sword that is highly sought after by Warriors and Rogues that do not raid thanks to its high top damage and bonus to critical chance. 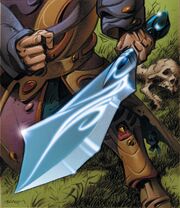 "The blade's keen edge always fetches a high price at the auction house."

It is believed this item was named after Blizzard programmer Monte Krol, a Lead Tools Programmer and voice actor for the game.

There was a joke on some servers involving Krol Blade, often linked to Chuck Norris or used to replace words in sentences which usually ended in a massive amount of spam. People also seemed to randomly spam Krol Blade numerous times, for no apparent reason.