For the titanic watcher who was named Kronus in beta, see Loken.

Kronus is a Earth Fury NPC who assists the Horde in battle in Ashran.

First encountered as an Underpowered Earth Fury, Kronus must be empowered through by gathering 3,000 Artifact Fragments for Shaman Atomik, in Warspear Outpost. Once empowered, he will move toward the forward most Horde-controlled base, attacking any hostile characters he encounters. 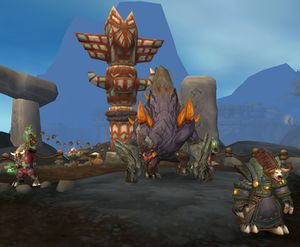 Atomik and the shamans, channeling energy into the Underpowered Earth Fury

Atomik, upon empowering Kronus
Atomik yells: Kronus has been energized! He's out to patrol Ashran!

Atomik, upon Kronus' death
Atomik yells: You fools! The Alliance has killed Kronus!

For tips on Kronus' role in the battle of Ashran, see Ashran.