Krosus before being awakened by Gul'dan at the Tomb Approach

Krosus is a massive doom lord and the fourth boss of the Nighthold. During the battle for the Broken Shore, Krosus was summoned by Gul'dan to seemingly kill Tirion Fordring, after which he was defeated by the combined forces of the Alliance and the Horde.

This colossal doom lord, one of the largest and mightiest creatures in the armies of the Legion, was defeated at the Broken Shore through the combined might of the greatest heroes of the Horde and the Alliance. Having recovered from his wounds, Krosus emerges from the bay between the Nighthold and the Tomb of Sargeras to crush any who would oppose the Legion.

Players encounter Krosus on a broken section of bridge. Over the course of the encounter, Krosus smashes sections of the bridge, forcing players to retreat into a dwindling space. If Krosus is not defeated in time, players will be left with no foothold, and will plunge into the sea and perish.

Battle for the Broken Shore

You will know fear. 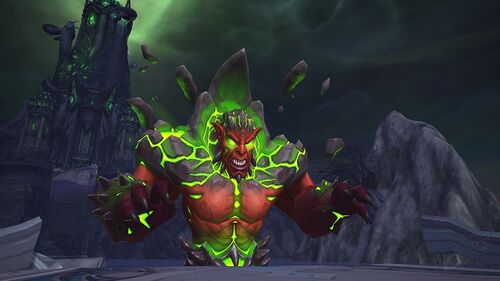 Aggro
Come then! Meet your end!

Wipe
Laughable! A wonder this world survived so long.

Outro
Archmage Khadgar yells: That was for Tirion Fordring, monster! Krosus may have not struck the killing blow, but he played a part in our great champion's fall.