From Wowpedia
(Redirected from Kruul)
Jump to: navigation, search

“Highlord Kruul waded into battle without regard for his own well-being.
His wounds would heal - his enemies' would not.”

Highlord Kruul was a doomguard boss who appeared in various parts of Azeroth during the Dark Portal Opens event. After the Dark Portal reopened, he officially replaced Lord Kazzak (now Doom Lord Kazzak in Outland's Hellfire Peninsula) as the Burning Legion's field commander in Azeroth.

Before the Burning Legion was about to strike at Azeroth from Outland, Kruul was tasked to kill Illidan Stormrage. The two battled but Kruul was eventually defeated and left the fight through a portal.

When the defenders of Azeroth pushed the demonic forces back through the Dark Portal to Hellfire Peninsula, Kruul joined his forces at the Stair of Destiny to fight them. Unbeknownst to the Azerothian forces, Kruul was attacked by Illidari demon hunters who distracted him long enough for Illidan Stormrage to kill him with a blast of fel magic that tore a hole through his torso. Without Kruul to command them the demons fell into disarray, allowing the Alliance and Horde to gain a foothold at the Stair of Destiny. They would never learn that the Illidari had saved them from certain defeat at the hands of Kruul.[3] 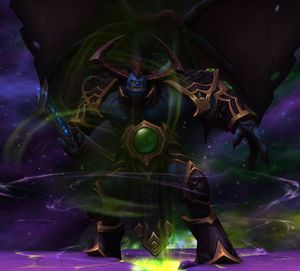 Highlord Kruul in the Twisting Nether.

Soon after Kruul's death at the hands of the Illidari, the Illidari were imprisoned by the Wardens. During that imprisonment, the Kirin Tor locked Kruul's heart away in the vaults of Dalaran to keep the Legion from retrieving it. Many years later, during the Legion's third invasion of Azeroth, the demons finally broke into Dalaran's vaults and stole Kruul's heart despite Kor'vas Bloodthorn's attempts to stop them. Prophet Velen discovered that Kruul's minions stole his heart to hasten his return within the Twisting Nether, and sent Kor'vas and an adventurer to the Stair of Destiny to pry open a way into Kruul's realm.

Kor'vas worked to reactivate the portal that Kruul's lackeys had left behind, while defended by the adventurer from demons that were trying to stave them off while Kruul was regenerating. After the death of Lord Vazuun, Kor'vas decided that the two of them could not defeat Kruul alone and sent the adventurer back to Dalaran to report to the Council of Six while she kept the portal stabilized. Archmage Modera vowed to prepare an assault on his lair, and Archmage Karlain ensured that the Illidari were given all the supplies that Dalaran could spare.[4][5][6]

Later, the adventurer, Kor'vas, and Velen confronted Kruul inside the Twisting Nether. He claimed to be empowered by the souls of a thousand conquered worlds and killed most of his own minions to empower himself further. Inquisitor Variss captured Kor'vas, but after Velen and the adventurer killed him to free her, Kruul attacked. Before he could die Kruul overloaded himself with power to self-destruct and kill his opponents along with him, but Velen saved Kor'vas and the adventurer.[7] Because he died inside the Twisting Nether, Kruul is now dead for good.

From the World of Warcraft news page under patch 2.0.3:

It is also reported that Lord Kazzak was seen departing through the Dark Portal. In his stead he has left his minion, Highlord Kruul, to sow fear and confusion among the defenders.

Accompanied by a host of infernals, Kruul has been seen near a number of major cities in Azeroth (a possible reference to the near legendary kites of his predecessor Doom Lord Kazzak), along with the following outdoor areas: 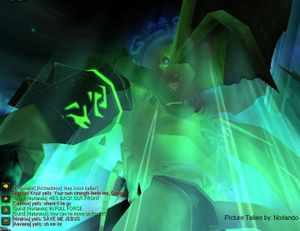 After finding Highlord Kruul you will need a well geared/skilled raid. The best places to engage him are the above zones, far away from major cities so that wandering players aren't killed (this avoids the 70k heal). Due to the short enrage timer, he will put out more damage, so he requires a larger raid with more healing, dps, and tanks to finish him quicker than Kazzak. Before pulling it is important to note a few things. First, there will be a flaming area near his spawn point that periodically releases level 50 Infernal Hound. They can be easily killed to avoid them attacking healers. Second, at each spawn there will be two boss infernals, these are easily pulled and killed away from Kruul and do not respawn. They also drop a BoE blue, so finding Kruul before he is killed could be quite profitable.

Most of his abilities are copies from Lord Kazzak, which is fitting since he is Kazzak's minion. He has yet to be observed using all of Kazzak's abilities.

Killing a player
Your own strength feeds me, <player>!

Despawn
Ha! This place is not yet worthy of my infliction.

It is reported that he had the same loot-table as Lord Kazzak had in the Blasted Lands.