The Kul Tiran civil war was an armed conflict which occurred on the island chain of Kul Tiras between the ruling dynasty of House Proudmoore and a number of dissident factions, around the time of the Fourth War. Specifically, the houses of Ashvane and Stormsong separately sought to overthrow Proudmoore power and take the nation for their own ends.

Mostly localized to the regions of Tiragarde Sound and Stormsong Valley, the fighting would eventually threaten to topple the Proudmoore Admiralty, particularly during the climactic Siege of Boralus. With the aid of the Alliance, however, Proudmoore forces were able to gain the upper hand across the board, and emerged triumphant.

The civil war in Kul Tiras was an important event during the wider war in Kul Tiras, as well as the Blood War. In its aftermath, the rank of Lord Admiral was passed to Jaina Proudmoore from her mother; at the same time, Kul Tiras finally reentered the Alliance and committed itself fully to the ongoing war against the Horde.

The civil war in Kul Tiras took place at a time of great change for the island nation and its people. The Fourth War between the Alliance and Horde continued to rage across Azeroth, with the Alliance venturing to Kul Tiras to seek their aid in the fight. The Proudmoore Admiralty which ruled the kingdom had also become increasingly ineffective, with Lord Admiral Katherine Proudmoore mostly unaware of the troubles brewing close at hand.

Lady Priscilla Ashvane of House Ashvane long nurtured a desire to seize control of Kul Tiras for herself, believing the Proudmoores to be unfit for leadership. She kept these motives hidden, however, and pretended to remain a close friend and confidant to the Lord Admiral, both women having lost their husbands at Theramore. Behind the scenes, Priscilla used the wealth and power of the Ashvane Company to undermine Proudmoore authority, going as far as to form a secret alliance with the Irontide Raiders of Freehold. Azerite weaponry and other products manufactured by the company were sent to arm the pirates, in preparation for an eventual coup.

Meanwhile, to the north in Stormsong Valley, dark forces plotted to ruin the land and its people. Lord Stormsong and the tidesages, long having maintained a close connection to the sea, would fall to corruption at the hands of malicious whispers from the depths. Now aligned with Queen Azshara and her naga, House Stormsong abandoned its responsibilities to the people of the Valley, instead focusing entirely on preparations to conquer Kul Tiras for their dark masters.

These troubling events took place before the backdrop of a mystery involving the Kul Tiran fleet, which had been missing at sea for some time. The fleet's absence left the kingdom compromised and vulnerable, and eventually paved the way for a full-scale civil war. At the same time as the civil war, other conflicts across Kul Tiras also threatened to overwhelm the nation.

“You're too weak to rule, Katherine. Your family has always been too weak. The Proudmoore legacy of failure dies with you!”

Lady Priscilla Ashvane's plans to take power from House Proudmoore continued for some time unopposed, Lord Admiral Katherine Proudmoore remaining totally unaware of the plot and still believing Priscilla to be a loyal friend. When Jaina Proudmoore and the Alliance arrived in Boralus to seek the kingdom's aid, Katherine would disown her daughter and hand her over to House Ashvane. The Alliance forces, narrowly avoiding the same fate, began to work with Cyrus Crestfall and sympathetic Kul Tirans to salvage the situation.[2] 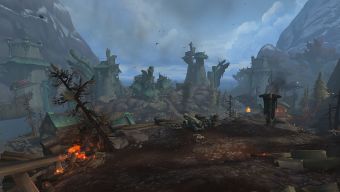 The destruction wrought at Daelin's Gate

Taelia, Flynn Fairwind, and an Alliance emissary worked to uncover the true scope of House Ashvane's plans: from the Ashvane Foundry, manufactured Azerite weapons were being sent to pirates in Freehold. In a deal made with Harlan Sweete of the Irontide Raiders, Lady Ashvane hoped that the chaos caused by the newly-equipped pirate fleet would undermine the authority of House Proudmoore, enough for her to rise to power. Those loyal to the Proudmoores eventually infiltrated Freehold itself and recovered proof of the conspiracy.

Shortly after, the Irontide struck at Daelin's Gate in southern Tiragarde Sound, which long protected access to the inner bay. With the Ashvane Company's weapons, they were able to demolish the sea gate and much of its defenses. The intervention of Proudmoore forces at Vigil Hill managed to prevent a breakthrough and drive off the pirate fleet, but news of the attack quickly spread throughout the region.

In Boralus's Unity Square, Katherine Proudmoore subsequently addressed a crowd of gathered citizens, with Lady Ashvane in attendance. The Lord Admiral revealed her intention to step down in favor of Ashvane, but the ceremony was interrupted by the arrival of Taelia and others. With the evidence they had gathered, they revealed the Ashvane plot in front of those gathered. In response, Priscilla detonated a sack of Azerite before attempting to flee. Simultaneously, Ashvane forces in attendance turned on the Proudmoore Guard present. The attempted coup was eventually crushed, though Priscilla herself escaped the scene. Katherine Proudmoore, shaken by these revelations, agreed to meet with the Alliance and discuss some form of cooperation.

Lady Priscilla and the Ashvane Company did not cease their ambitions after the setback in Boralus; they continued to work against House Proudmoore and build up their forces for another attempt at seizing power. Across Tiragarde Sound, the Proudmoore Admiralty dispatched forces to disrupt Ashvane and pirate efforts. At the time, the Ashvane Trading Company was ordered to stop all weapons manufacturing, though this was ignored.[3] 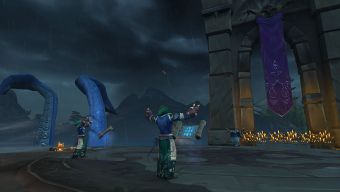 The Tidesages of House Stormsong

“Children of the sea, today is the dawn of a new age for us all. House Stormsong must take control of this shattered kingdom and restore it to glory! No more will we work our fields and build our ships for the haughty Boralus elite to give nothing in return. We must work as one and muster our strength. Kul Tiras will forever belong to its people! Our mighty tidesages shall gather us all to victory with the very power of the sea itself! Together we shall return to the tides. Together, we shall be powerful once again!”

With House Proudmoore distracted by events in Tiragarde Sound, the dark plans of Lord Stormsong continued with little resistance. Unbeknownst to all, the House Stormsong tidesages were responsible for the disappearance of the Kul Tiran fleet. From the Shrine of the Storm, they kept up a ritual that trapped the wayward ships in a dark storm. Stormsong and his followers ultimately hoped to deliver the fleet to Queen Azshara, and aid her in reclaiming Kul Tiras for the sea. Publicly, the loss of the fleet was ignored, with a focus being placed on building new ships instead.[5]

On the other side of the Valley, Zeth'jir naga launched their own invasion near Fort Daelin, garrisoned by the Proudmoore Battalion. Coming close to overwhelming the defenses, the naga also attempted to breach the nearby Eventide Delta to flood the area. With the aid of Alliance champions, the Proudmoore soldiers defended Fort Daelin and Seabreeze Village from attack, while defeating a major assault on the sea wall.

The fall of House Stormsong to corruption meant that the job of protecting the Valley now fell vacant. Growing threats across the region caused more and more damage, while those trying to enter Stormsong Valley were turned away at the border.[6] The local populace, with the aid of uncorrupted tidesages and allies of House Proudmoore, would form the Storm's Wake to fight back the encroaching danger. Brother Pike would lead the investigation into the darkness gripping House Stormsong; as they did so, the Storm's Wake fought Stormsong loyalists and freed many being forced to work against their will.[7]

More militia and "awakened" members of House Stormsong eventually joined the cause as Brother Pike and his allies pushed closer to the Shrine of the Storm and the heart of the corruption. The discovery of k'thir and other monstrosities reinforced the need to defeat Lord Stormsong. After much fighting, a party opened the way to the Shrine of the Storm itself, and confronted Stormsong outside the bastion.[8] They would eventually pursue him into the Shrine and engage his legions of followers. The Tidesage Council and Lord Stormsong himself, were killed to prevent the loss of the fleet, while the corruption at the heart of the site was also purged.

After the victory, Brother Pike performed a ritual to free the Kul Tiran fleet from its imprisonment. Although successful, he was not able to actually call the fleet home, believing this task to be in the hands of the Proudmoores themselves.[9] Though a major blow had been dealt against House Stormsong, fighting continued throughout Stormsong Valley. The Storm's Wake remained active in meeting any persistent threats.

After House Ashvane's treachery was revealed, and threats in Stormsong Valley and Drustvar were dealt with, Lord Admiral Katherine Proudmoore focused on locating a rescuing her exiled daughter. With the help of Alliance champions, she discovered that Jaina had been sent to the Blighted Lands. While the Lord Admiral traveled in person to recover Jaina, Lady Ashvane gathered her forces for a major attack on the capital of Boralus. 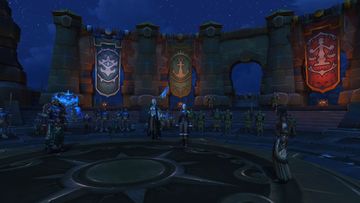 Jaina Proudmoore is elevated to Lord Admiral, while Kul Tiras rejoins the Alliance

Katherine and Jaina would return to the city just as the Siege of Boralus began.[10] With both a pirate fleet and Ashvane Company forces, Ashvane's army managed to breach the walls and invade the city proper. The Proudmoore Guard grappled with the invaders in the streets, while members of the Alliance tried to crush the attack. Katherine Proudmoore fortified her position in Proudmoore Keep, which narrowly avoided being reduced by Azerite artillery. Eventually, Proudmoore forces pushed through the city and slowly turned the tide. The defeat of Viq'Goth, a kraken unleashed by Ashvane, signaled victory over the Ashvane forces currently investing Boralus.

Soon after, another fleet led personally by Priscilla Ashvane prepared to descend on the city, whose defenses were no longer able to resist. From the battlements of the Great Gate, Katherine and Jaina watched the approaching force. In one last effort, Katherine gave Jaina her father's pendant, which possessed great value for generations of House Proudmoore. Through the trinket, Jaina was subsequently able to locate the missing Kul Tiran fleet and call them to Boralus's defense. Emerging from the mists, the fleet (led by Tandred Proudmoore) immediately set to work surrounding the enemy vessels. Outmaneuvered and outgunned, Lady Ashvane and her forces quickly surrendered, ending hostilities.

The defeat of Lady Ashvane during the Siege of Boralus and the return of the fleet marked a decisive end to the civil war. Shortly afterwards, the various houses of Kul Tiras convened in Unity Square, where Katherine officially stepped down as Lord Admiral in favor of Jaina.[11] Those gathered pledged their loyalty to the new Lord Admiral and House Proudmoore. With King Anduin Wrynn of the Alliance also in attendance, Jaina also officially committed Kul Tiras to the Alliance cause, and the ongoing Fourth War against the Horde.