The Kul Tiran fleet[1] is the principal naval force of the Admiralty of Kul Tiras. It specifically refers to the main body of the modern-day Kul Tiran navy, which forms much of the nation's offensive and defensive power. The fleet is a highly formidable force and is central to the legendary reputation of Kul Tiras as a maritime power. It proudly stands as one of the finest of its kind on Azeroth.[2] It is also the latest in a long line of Kul Tiran fleets, such as the doomed Third Fleet of the Second War.

The tidesages bless every last Kul Tiran vessel, which is what really sets them apart from the ships visiting Kul Tiras. The nation's largest ships always carry a tidesage to navigate through storms, withstand heavy seas, and put wind in their sails.[3]

Only a few gryphons are selected to be sea scouts operating from flagships in the fleet. Their long-range reconnaissance is an integral part of Kul Tiran sea dominance.[4]

The Kul Tiran naval force is crewed by sailors descended from centuries of seafairing traditions.[5]

After its foundation as a nation, Kul Tiras built up a mighty fleet of merchant vessels that sailed throughout the known lands in search of exotic goods to trade and sell.[6] As of the start of the First War, these far-ranging merchant ships made it the most prosperous nation in the known world. When the orcs began to raid the coastal settlements of Lordaeron, Lord Admiral Daelin Proudmoore took it upon himself to construct an armada of warships in order to pledge the assistance of the merchant-nation to the burgeoning Alliance.[7]

The Kul Tiran fleet was then joined with the other fleets of the Alliance, under the leadership of the new Grand Admiral Proudmoore. Under his control, the Alliance navy intercepted the Horde fleet near the island of Zul'Dare, before the Battle of Hillsbrad Foothills. Proudmoore's vessels finding the crude Horde ships was akin to a wolf crossing paths with an injured lamb. Proudmoore's seasoned maritime fleet was able to easily outmaneuver the less sea experienced orc navy sooner than he anticipated.

However, the Horde fleet was not alone. Warchief Doomhammer, who had been wary of the humans' naval superiority, had ordered the Dragonmaw clan to supply the newly enslaved red dragonflight as support. Though reluctant to do so as battle mount training had not yet been completed, Nekros Skullcrusher sent three red dragons to protect the Horde fleet as it crossed to Lordaeron. Reluctantly following the orcs from behind, the enslaved red dragons appeared after Proudmoore's navy attacked and had bathed several of the Alliance vessels in fire. Though the dragons were few in number, Proudmoore had no means to combat them at the time and was forced to call a retreat. As the Alliance fleet scattered, the Horde ships continued their advance toward Lordaeron.[8]

Later in the conflict, after the Horde was completely driven from Lordaeron and Khaz Modan was liberated, the Black Tooth Grin clan with the Horde fleet had been sailing towards the Horde-controlled Stormwind when they were attacked near the island of Crestfall by the Alliance navy under the command of Grand Admiral Proudmoore. The battle had begun similar to the one near Zul'Dare, Proudmoore outmaneuvered his foes and hammered them with cannon fire. And just as before, the Horde had dragons. The beasts swooped down from the skies and engulfed the Alliance ships in sheets of fire.

Admiral Proudmoore's ships were able to easily outflank the lumbering and crude orc vessels, wracking them with cannon fire and inflicting casualties. The Horde ships were guarded by red dragon riders, which dove from the sky and burned Alliance vessels. This time, however, the Alliance fleet was accompanied by Wildhammer dwarf gryphon riders led by Kurdran Wildhammer. The gryphon riders had learned from their battles against the dragons across the high elven kingdom of Quel'Thalas to use their mobility against their larger adversaries.

Eventually, the majority of the Horde fleet was left in ruins by Proudmoore's superior forces. Only a handful of vessels escaped being sunk, including Dal'rend and Maim's ship. Above, the dwarves' fearless efforts were enough to ultimately drive the dragon riders to flight, and they subsequently scattered in all directions.[9] Among the losses suffered by Proudmoore's navy was the loss of the Third Fleet to the dragon-riders of the Dragonmaw orcs, taking with it Derek Proudmoore, eldest son of the Grand Admiral.[10]

A portion of the Kul Tiran fleet was attacked by black dragons in or near Baradin Bay.[11]

Following the splintering of the Alliance, Kul Tiras was one of the nations that remained an ally with King Terenas. Admiral Proudmoore's mighty fleets patrolled the trade lanes hunting pirates and marauders, maintaining order on the high seas.[12]

Jaina Proudmoore, the daughter of Daelin Proudmoore, had been convinced by the mysterious Prophet that sailing west to Kalimdor with refugees from Lordaeron was the only course to save humanity. She commandeered the Kul Tiras fleet[13] and took them immediately across the Great Sea, where she saved the world by allying with the Horde and the Sentinels at Mount Hyjal.

The founding of Durotar

Admiral Daelin Proudmoore's fleet eventually reached Kalimdor after some time to reestablish contact with the missing Human Expedition that escaped the destruction of Lordaeron and search for his missing daughter.[14] Yet when they discovered the fugitive orcs and Darkspear trolls had established a foothold on the land, Admiral Proudmoore launched an invasion on the resurgent Horde's new kingdom. The Kul Tiras fleet began attacking the Horde settlements on the Echo Isles, forcing the Darkspear trolls to relocate to the mainland. Unable to agree with her father's decisions, Jaina started helping Thrall and his champion Rexxar.

Thrall and his armies marched towards Theramore where he was advised by Jaina to hire goblin shipbuilders to construct warships capable of breaking the Kul Tiran blockade of Theramore. The Horde forces eventually landed in Theramore City and managed to defeat the Kul Tiran sailors and marines, with Daelin himself being killed by the orcish heroes along the fleet's flagship.

A sizeable, second wave of Kul Tiras sailors and marines from the Grand Admiral's expedition, led by Lieutenant Benedict, established themselves in Tiragarde Keep sometime later, continuing to fight the Horde as per Admiral Proudmoore's orders. Another fleet, led by Lieutenant Alverold, was tasked to scout out the coasts of Kalimdor.[15] Eventually, most of the survivors of Daelin's fleet sailed back to the Eastern Kingdoms.[16]

After the massive loss of ships and men in the invasion of Durotar, the navy was once again gradually rebuilt under the new Lord Admiral Katherine Proudmoore. The following years marked a time of self-imposed isolation for Kul Tiras, and so the fleet took part in little to no engagements outside the kingdom. 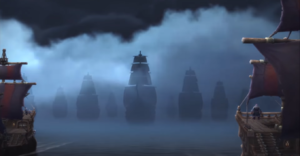 The fleet emerges from the mist to end the Siege of Boralus. 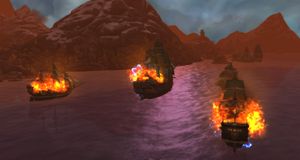 Months before the Blood War,[17] the fleet mysteriously disappeared at sea, along with its commander Tandred Proudmoore. Unbeknownst to most of the nation, the ships were being held captive in a massive artificial storm by Kul Tiras's very own Tidesages, normally sworn to protect the fleet. House Stormsong and the Tidesages came under the dark influence of Queen Azshara and sought to deliver the fleet to their new mistress regardless of the cost.[1]

The absence of the fleet left all of Kul Tiras vulnerable to many threats. In particular, Lady Ashvane and the Irontide Raiders set their sights on the capital of Boralus and Tiragarde Sound amid the turmoil. Meanwhile, in Stormsong Valley, the corruption of House Stormsong spread across the land. Though supposedly trying to call the fleet home, the Tidesages' true desires were eventually uncovered. A force of Storm's Wake militia and their champions invaded the Shrine of the Storm, preventing a ritual intended to deliver the fleet to Azshara. After defeating Lord Stormsong and his corruption, Brother Pike performed his own ritual at the heart of the Shrine, ensuring the temporary safety of the fleet, though it still remained lost at sea.[18]

During the Siege of Boralus led by Lady Ashvane, the city stood on the brink of falling. As Ashvane's final attack arrived, Jaina Proudmoore was given her father's pendant by her mother as a last hope. Using the trinket, which Daelin Proudmoore had used to call the fleet in times past, Jaina was able to both locate the lost fleet and bring it home. Before the harbor gates, the Kul Tiran fleet cut through the mists in its full glory, with Captain Tandred Proudmoore at the helm. The fleet quickly surrounded Ashvane's pirate forces, who surrendered.[19] This signaled the restoration of Kul Tiras's naval power once more, as the nation proceeded to officially join the Alliance.

After the Horde reclaimed the body of Derek Proudmoore, several ships were sent to Plunder Harbor to retrieve it. As the Horde agents get a hold of the Abyssal Scepter, they used its power against the ships, setting them on fire.[20]

After receiving reports of the Alliance invading northern Zandalar and conquering the Blood Gate not far from Dazar'alor, the Zandalari and the Horde decided to combine their forces and drive them out with a counteroffensive.[21] With the Kul Tiran fleet said to be just off the coast of Nazmir, Princess Talanji sent the Speaker of the Horde to get the Golden Fleet to attack them.[22] Once a majority of the Horde's forces were lured to Nazmir, the Alliance navy revealed that the assault on Nazmir was a ruse and began their true objective: the assault on Dazar'alor. The Golden Fleet sought to impede the Alliance navy's path, which was spearheaded by Jaina's ship, and so the Zandalari harried them with ballistaes, but the Alliance had secretly planted explosives on their ships beforehand. Just as Gelbin Mekkatorque was about to remotely detonate the explosives with his remote detonator machine, Gelbin's floor collapsed from the impact of one of the Golden Fleet's ballistae missiles. Gelbin fell below the deck of Jaina's ship and pulled himself out of the rubble so he could rush to re-position his remote detonator. Once the remote detonator was upright again, Gelbin pushed the detonator button and blew up the entirety of the Golden Fleet stationed there, allowing the Alliance navy to invade Dazar'alor with little resistance.

A great portion of the Kul Tiran fleet chased after Nathanos Blightcaller's across the Great Sea. Suddenly, the seas opened due to Queen Azshara's usage of the Tidestone of Golganneth, and all of the vessels present wrecked in Nazjatar.