This article is about the island chain itself. For the human kingdom, see Kul Tiras (kingdom). For the playable allied race, see Kul Tiran (playable).

Kul Tiras (also spelled as Kul'Tiras,[1][2] pronounced KOOL-teer-AHS)[3] is an island chain located in the Great Sea, west of the Eastern Kingdoms. The islands are home to the human nation of the same name, having originally been discovered and colonized by Gilnean sailors from the mainland Eastern Kingdoms.[4]

Kul Tiras has played host to a mighty naval tradition ever since its first settling by humans. During the Second War, it was the largest maritime force in Azeroth and a major center for the war effort against the Orcish Horde. Since then, and with the eventual disintegration of the Alliance of Lordaeron, Kul Tiras became significantly more isolated and less involved on the world stage.

Kul Tiras would once again return to prominence at the time of the Fourth War, when the Alliance ventured to the island to enlist the aid of the potent Kul Tiran navy in their new war against the Horde.

2,700 years BDP, after the Troll Wars, the humans of Arathor traveled to various regions. Some human sailors left Gilneas and found a large island full of metal ores and other resources. Following their arrival in Kul Tiras, the human colonists were attacked by the native Drust. The war that ensued led the large and hardy race, who lived in Drustvar, to extinction.[5]

The sailors then founded a mighty maritime outpost named Kul Tiras[6] and in time it became a city-state that developed a thriving economy based on fishing and exports. Over the years, mighty fleets of merchant vessels were built and they sailed throughout the seas in search of exotic goods to trade and sell.[7]

Sometime after the third invasion of the Burning Legion, the Alliance came to the island seeking the powerful navy of Kul Tiras to aid in their new war against the Horde. 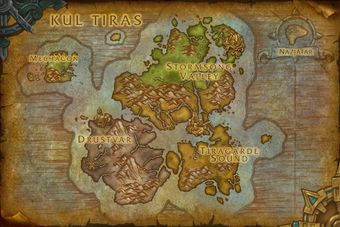 Kul Tiras is located west of Baradin Bay and Dun Morogh, and southeast of the Broken Isles.[8] It is cold, mountainous, and rich with metal ores and other valuable natural resources.[9][10]

Kul Tiras is separated into four zones, three of which are scaled to the player's level between 110 - 120.

Kul Tiras is a large island off Khaz Modan's west coast, between Azeroth and Lordaeron, though is considered a land of this last continent. The unsettled areas are covered with rolling hills and sparse evergreen woods. Kul Tiras is temperate, though subject to sudden ocean storms. The nation is also very windy, which makes zeppelin rides perilous.[11] Kul Tiras' greatest asset is also its greatest danger. Murlocs and naga crawl from the sea to torment sailors and fishermen. Pirates roam the waters preying on merchant vessels.[12]

The nearby islands of Crestfall, immediately off the northeast coast, and farther Tol Barad, in the same direction, are also parts of Kul Tiras. Wild game includes a few forest creatures such as foxes, squirrels, and the occasional black bear. Kul Tiras' shores possess good fishing and provide ample seafood. There are excellent lobster and king crab in Kul Tiras.[11]

The city of Boralus, the town of Drisburg, and the former estate of Duke Falrevere are also found on the island.

Kul Tiras may have been mentioned in Blood of Our Fathers as Aldous Lescovar said that Jaina Proudmoore's homeland burned in slag.