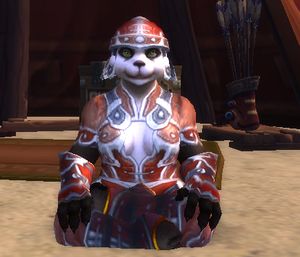 Most of the duels within the Cradle take place between two trainees. Rarely, when a trainee exhibits a rare amount of skill, they will have an opportunity to duel their trainer.

Today you duel against Kuo-Na. She wil be waiting for you at the Pedestal of Hope.

We will be watching, <name>.

You continue to impress, <name>.

Come again soon. Your training is not over yet.

Kuo-Na Quillpaw says: See you there, <name>!
She teleports out.

Mount up and head southeast. Kuo-Na can be found on the north side of the Pedestal of Hope. Speak with her:

Thelonius has told me much about your skill in battle. I look forward to seeing it firsthand.

Let's fight!
Kuo-Na Quillpaw says: I will not hold back, <name>. Please do me the favor of doing the same.

Kuo-Na is a level 90 pandaren with 787,000 health and the following abilities:

Kuo-Na Quillpaw says: It's been a while since I lost to a trainee. Thank you for the match, <name>.

I heard you beat Kuo-Na. Impressive stuff... RIVAL. Well, I've been training, too. And I've got a few surprises for you.