Kur'talos Ravencrest was the master of Black Rook Hold and the first leader of the Kaldorei Resistance during the War of the Ancients. Ravencrest was a politician and refused to contact the non-kaldorei races for aid because he feared the defection of his more conservative commanders. 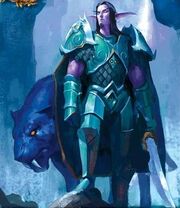 The Ravencrest clan was a noble one, but it was not of the Highborne caste. On the contrary, Kur'talos, like most of the night elf populace, regarded the Highborne with suspicion and dislike. He was a levelheaded man, a skilled warrior, and an inspiring leader on the battlefield. It was a matter of both honor and practicality for him to fight alongside his soldiers: his presence inspired others to greater feats of courage and skill. Even so, Kur'talos had many of the ancient night elves' prejudices against other races. He rejected any suggestion of asking the earthen or tauren for help. Furthermore, he considered dragons extremely powerful, but he believed they would simply devour any mortal envoys. He therefore refused to permit any night elves to appeal to the dragons for assistance in fighting the Legion.[2]

Ravencrest once came across two ravens, Huginn and Muninn, who had a jewel called

[The Raven's Eye] that let them read and understand any language. He tricked them into giving it to him in exchange for a piece of candy.[3] With the Raven's Eye, Ravencrest had an almost perfect espionage team during the War of the Ancients.[4]

Ravencrest became the formal patron of Illidan Stormrage after recruiting Illidan to help him track down Broxigar. It was Ravencrest who would promote Illidan to the leader of the Moon Guard, but he would come to question this decision because of Illidan's recklessness, as he had the mages channel their power into him to empower his own spells, which in turn left the channeling Moon Guard defenseless. Perhaps Kur'talos could have stopped Illidan's rash behavior, but he would never have the opportunity.[5]

Kur'talos was deeply loyal to Queen Azshara and could not believe she had been involved in the Burning Legion's arrival on Azeroth. Indeed, he led the night elf forces against the demons into battle time and again, shouting the queen's name as a rallying cry. In reality, Azshara had given her loyalty to Sargeras, ruler of the Legion, and she was irritated by the night elf army's continued opposition to the Legion, which divided the demons' forces and delayed Sargeras from successfully entering Azeroth. Azshara thus eventually ordered her second-in-command, Captain Varo'then, to solve this issue. Eager to please his queen, Varo'then dispatched the assassin Kelorn Nightblade[6] to the battlefront. The orc Broxigar spotted him and tried to warn Kur'talos, but his warning came too late. The assassin stabbed Kur'talos through the back of the neck before attempting to flee. Broxigar swiftly caught up to the assassin and slew him in turn.

Lord Desdel Stareye, who had been Kur'talos' second-in-command, succeeded Kur'talos as commander of the night elf defenders. However Stareye was incompetent, and so Ravencrest's ideals (and general competence) were not upheld until Jarod Shadowsong assumed the mantle. Lord Ravencrest's death broke his daughter, her hubris began to crumble away and she started to question everything and everyone. When Illidan left the resistance, Illysanna followed him, believing he was right about how to fight the demons.[7]

Kur'talos Ravencrest in World of Warcraft.

After stealing the corpse of Illidan Stormrage from the Vault of the Wardens, Gul'dan conducted a ritual to separate his soul from his body. This energy brought the souls of the Ravencrest clan back to their ancestral home.[8] The ghosts of the Hold's forces have been risen by Gul'dan, from the lowliest soldier to Desdel Stareye and even Lord Ravencrest himself, to protect the secrets within the tower. These undead night elves cannot see the living for what they truly are and believe them to be demons[9] as they eternally relive the horrors of the War of Ancients.[10]

A dreadlord named Dantalionax impersonates Latosius atop Black Rook Hold and manipulates Lord Ravencrest to work for the Legion. When adventurers battle the pair, Dantalionax sheds his disguise and Ravencrest resists his control to fight back, calling on the souls of his ancestors to defeat the dreadlord.

Kur'talos is seen observing fights at the Raven's Glory arena.

The naga-infested ruins of a statue referred to as the Ravencrest Monument can be found in the southern area of Azshara. While the statue may refer to Kur'talos Ravencrest, this cannot be confirmed. Only the Ravencrest surname is attached to the site, and the statue appears to depict a female Night Elf. His sword, called

[Ravencrest's Legacy], was only available to players who had completed the questline to receive