“We will hear Sky-Ree's calls upon the winds. We will hear your hammer thunder across the mountaintops. Ride hard into the hereafter, brother. The halls of our ancestors await you.”

— Falstad Wildhammer, on Kurdran's memorial in the Valley of Heroes

Kurdran Wildhammer is a famed gryphon rider who was Chief Thane of the Wildhammer clan during the Second War and one of the heroes of the Alliance Expedition to Draenor.

He is a level 70 quest ender in Shadowmoon Valley and a level 85 quest giver in the Twilight Highlands.

Kurdran in the Warcraft II manual.

Kurdran Wildhammer - gryphon rider of Northeron[4] - was the Chief Thane of the Wildhammer clan, and the Hinterlands.[5] During the Second War, the Orcish Horde led by Orgrim Doomhammer invaded the Wildhammer homeland. Kurdran was one of the first dwarves to spot the invaders and initiate battle. Soon he was aided by the forces of the Alliance of Lordaeron, and together they fought the bloodthirsty horde. Kurdran pledged his and his kingdom's aid to Anduin Lothar after the human Alliance aided them in forcing the invading orcs and forest trolls out of their homeland. Kurdran and his loyal steed, the gryphon Sky'ree, became legendary during the war,[3] battling over land and sea as well as the air; lending aid to Lordaeron and Quel'Thalas as well as the final battles of the war by scouting the orcs in Blackrock Spire. He left the Second War with nine slain dragons to his credit.[3] After the war ended, Kurdran remained with the Alliance as a scout,[3] his service proving invaluable to the Alliance war effort.

Upon hearing that Deathwing had breached the Dark Portal into Draenor, Kurdran was only too eager to serve as scout and warrior for the Alliance Expedition to Draenor, and thus commanded the Gryphon Rider Division. Though Kurdran was captured during the raid on Auchindoun, he was rescued by the Alliance and met his vengeance upon those who imprisoned him.[6]

When Ner'zhul opened his unholy portals on Draenor, Kurdran elected to remain with his comrades and ensure that the Dark Portal was sealed to prevent it from harming Azeroth. For twenty years, he was believed dead, and immortalized in stone with his friends in the Valley of Heroes in Stormwind. Today, contact between Azeroth has at last been reestablished, and he now leads Alliance forces in Shadowmoon Valley.

Kurdran and Sky'ree survived the destruction of Draenor and, after joining forces with the Naaru, have taken up residence in Outland. Kurdran is the Thane of Wildhammer Stronghold, the Alliance outpost in Shadowmoon Valley, west of the Black Temple. Though he does not start any quests, Kurdran ends

[70] News of Victory. Interestingly, though he is not the target of any PvP objective, he has a tremendous amount of HP, at 5,588,800, more than any faction leader.

After returning from Outland to Azeroth around the time of the Shattering, Kurdran returned to Aerie Peak and learned about the situation in Ironforge. Kurdran had been feeling an overwhelming urge to make up for the years away and so he told Falstad, who succeeded him as high thane and therefore had been chosen by King Wrynn, that he would represent the Wildhammer clan in the Council of Three Hammers "as the only dwarf fit for the job." Falstad did not say anything, but not only did this undermine his authority, the look of anger and hurt on his face clearly noted the great disrespect Kurdran had shown him, as if his leadership for the past twenty years had been meaningless. This was one of Kurdran's overzealous attempts to prove he was the leader he'd always been, and though he knew the truth of how he treated his close friend, he preferred not to think about it out of guilt.

Kurdran then traveled to Ironforge. Tensions were running high between the Wildhammer clan and the other two clans in Ironforge as they were resentful of the Wildhammer's nonconformist tendencies as well as fearful of the false rumors circulating that said the Wildhammers were using barbaric brutal tactics on their enemies as well as their allies who didn't comply with their demands. Eventually the tensions led to a fight between a Wildhammer and a Bronzebeard that ended in somebody's death. The Bronzebeard clan and the Dark Iron clan had proposed to reforge the Hammer of the High King as an act of unity between the three clans and to ease the rising tensions in Ironforge but in order to do so, they required the scepter that belonged in Kurdran's possession. Though Kurdran was reluctant to part with the scepter for sentimental reasons and saw the reforging of the hammer as a waste of time, he nonetheless handed over the scepter so that the Wildhammer would be better received in Ironforge. Still, Kurdran had trouble adjusting to Ironforge as he missed the open skies of the Hinterlands and was not fond of the politicking required of his position. His troubles were compounded when tensions again rose as a fight broke out between Kurdran and his Wildhammer dwarves and some Dark Iron dwarves, which consequently led to a fire that killed his gryphon Sky'ree.

The hammer would later be reforged as an act of unity between the three dwarven clans, under decree of the Council of Three Hammers. Because Kurdran walked out immediately afterward, to his irritation it was decided that a dark iron smith should reforge the hammer, but he only blamed himself for not being there. A few days before the reforging, the Council discovered that the pieces of the hammer might've been fakes. Yet the majority of the Council agreed to continue with the reforging without the public knowing about it being a fake. Kurdran however, disagreed with the lie. Later that night, Kurdran would come to where the pieces were stored, and removed the Wildhammer scepter that was to be used as the hammer's handle. During a conversation with Moira Thaurissan, it was implied that she planned on the Wildhammers alienating the other two clans so that tensions between the Dark Irons and the Bronzebeards would lessen. Moira informed Kurdran that his brute strength was useless, and only winning hearts and minds mattered in Ironforge. The night before the reforging, Muradin Bronzebeard came across him outside the gates and advised Kurdran to compromise his principles a little as his beliefs were not only holding himself back, but his clan and the entire city as well. When he threw back the Bronzebeard's advice is stubborn anger, Muradin backhanded him after making sure that no one else was watching.

While wandering the city, Eli Thunderstrike found him and revealed that one of Sky'ree's three eggs had been rescued by another gryphon during the fire. Seeing Sky'ree's legacy continued on within the egg, Kurdran was inspired to do what he knew he had to do.

On the day of the reforging, it was discovered that the handle was missing, and Kurdran admitted he had stolen it. But instead of letting it be reforged, he smashed the handle with his stormhammer, and it shattered to pieces. Kurdran declared that the union of the dwarven clans shouldn't start with reforging a hammer that could be fractured again. Instead, Kurdran proposed that the dwarven clans move forward from the past and unite with a fresh start. Gladly, Muradin joined him in fracturing the other fragments while Moira did so reluctanly, her plan quietly foiled at such a public event.

Realizing that Falstad was the better dwarf to represent the Wildhammer clan in the Council of Three Hammers, Kurdran decided to step down from his position as Wildhammer representative and traveled to Stormwind to aid King Varian's army. Meeting with Falstad in Stonefire Tavern, he also planned, out of curiosity, to take a look at his statue in the Valley of Heroes; Falstad joked that it was difficult to think of something good to say for the placard.

For the first time since returning to Azeroth, Kurdran felt free.[7]

Kurdran, along with Thargas Anvilmar and Drukan and their clan retinues representing the Council of Three Hammers, sailed together to attend the summit in Darnassus to vote Gilneas into the Alliance. When a disagreement arose among the three clans of which contingent would enter the Darnassus portal first, Kurdran displayed some of the diplomatic acumen he picked up in Ironforge and used a rigged game of bones to ensure that the Bronzebeards would be first and the Dark Irons, so they wouldn't be first and yet not feel slighted, second.

At the final vote, the three representatives together agreed to vote in Gilneas' favor.[8]

Kurdran was present during a meeting with Varian and other Alliance leaders and ambassadors in Stormwind to decide on the best way to destroy the Horde's blockade around Kalimdor.[9]

When an Alliance player reaches Prestige Rank 2, Kurdran can be found in Stormwind Keep alongside other notable leaders of the Alliance. During

When it is discovered that Alleria and Turalyon are still alive, Khadgar reunites with them on Argus, homeworld of the Burning Legion. He tells them that Kurdran and Danath both live, though he does not get to see them as much as he would like, and the three decide that when the fighting is over the Sons of Lothar will hold a reunion feast.

Kurdran is well liked by his friends for his jolly personality and love for battle. He is a fierce warrior and does not like to be seen as a weakling, insisting to fight on despite being heavily wounded. Danath Trollbane was likely one of his closest friends and was whipped into frenzy hearing Kurdran's apparent death. Unlike many Wildhammers, he is not hostile towards wizards and spell-casters.[citation needed]

He was described as proud and belligerent.[3] 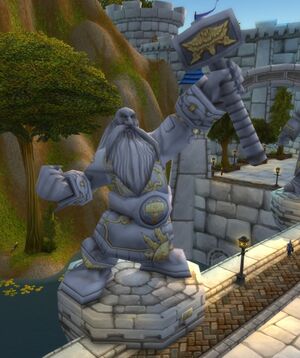 The statue of Kurdran Wildhammer in Stormwind.

Renowned Dragon Fighter. Gryphon Master of the Aerie Peak. Commander of the Gryphon Rider Division attached to the Alliance Expedition that marched into the orc homeworld of Draenor. Presumed deceased.

We will hear Sky-Ree's calls upon the winds. We will hear your hammer thunder across the mountaintops. Ride hard into the hereafter, brother. The halls of our ancestors await you.

I've been placed in command of Alliance joint operations in the Twilight Highlands.

The independent Wildhammer clans still dot this countryside. If we can unite them under the Alliance banner, nothing can stop us! But enemies close in from all sides. I hope you're ready for a fight, <class>.

Since the fall of Grim Batol, we Wildhammers have never truly been united. Out here in the Highlands, forgotten by the rest of teh[sic] world, the different clans have all gone their separate ways.

To join them all back together isn't going to be easy.