“Beware the mist and fog, mortals; for with them comes your end.”

The kvaldir (sometimes capitalized, and pronounced KUH-vall-deer), also known as sea vrykul,[3][4][5] are the spirits[6] of fearsome vrykul warriors or seafaring raiders who roam the seas raiding ships and coastal settlements. Working for Helya, the kvaldir raid the coasts and pull souls to Helheim, thus robbing Odyn of potential champions.[7] The spirits of those dishonorable warriors spend eternity in Helheim locked in an endless futile battle, always seeking glory but never able to attain it.[8]

The tuskarr call the kvaldir tuk-hariq, meaning "walkers of the fog" in their language.[9] They also refer to the kvaldir as sons of the mist.[10] 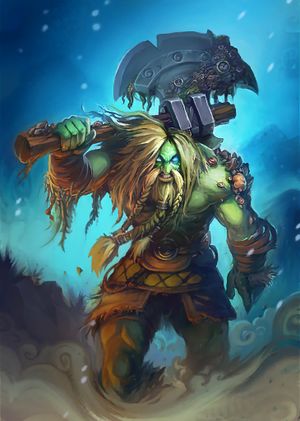 Working with Loken, Helya used her magic to seal off the Halls of Valor, keeping Odyn and his Valarjar trapped for ages in vengeance for Odyn turning her into a val'kyr against her will. Now liberated from her life of servitude, Helya forged a new home for herself and other Val'kyr. She created her refuge below the Halls of Valor, binding it to Azeroth's great seas. The ocean mists soon coiled up to envelop Helya's domain and shroud it from sight. Known as Helheim, this realm would become the final destination of many vrykul spirits after death.

Yet the darkness that had long festered in Helya's heart transformed Helheim into a place of nightmare and shadow. The souls of the dead vrykul who arrived there soon found themselves turned into vengeful wraithlike like beings. These cursed spirits were known as the kvaldir. They become one with the ocean mists, bound to the ebb and flow of the tides. The eternal fire of malice and anguish that burned in their souls would drive the kvaldir to raid and plunder the shores of Kalimdor for eternity.[11]

Other kvaldir came into being when one vrykul tribe particularly struggled against a terrible malaise that ravaged its people. Combating this affliction, named the curse of flesh, all but consumed the tribe. After exhausting all natural attempts, the tribe sought the aid of its priestesses. These women plumbed the world of spirits for answers, but they found only Helya lying in wait. Their ritual went horribly wrong, as Helya further corrupted those that sought freedom from their curse. These eternally vengeful beings would later join the kvaldir.[12] The kvaldir drag the souls of the unworthy and dishonorable to Helheim for Helya.[8] 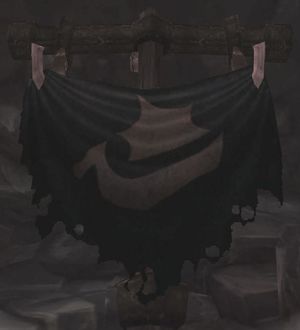 The vrykul had a burial ground in Howling Fjord called Shield Hill, and at some point just prior to Wrath of the Lich King, a band of pirates happened upon the graveyard and stole several artifacts from several graves - graves of very important vrykul that had perished years before. The angry spirits of the disturbed graves are left howling for vengeance.

The theft is discovered by the tuskarr, who were unfortunate enough to have several hunters approach the area due to the strange activity of the restless spirits of the dead.[13] As for the pirates, they've been hiding out and dealing with troubles of their own, as the artifacts they've stolen have proven to be far more trouble than their apparent worth. According to "Silvermoon" Harry at Scalawag Point, everyone who has come into touch with these artifacts has ended up dead, missing or both.

[The Frozen Heart of Isuldof] drove one of the pirates insane, and now "Mad" Jonah Sterling hides in a cavern near the pirate cove, having assigned a bear to guard the artifact.

[The Staff of Storm's Fury] had much the same effect on a crew member named Abdul the Insane, who now holds the staff on a ship at Iskaal. The giant Sorlof is holding

[The Shield of the Aesirites], and the only way to retrieve it is to gain the trust of the now-undead crew of the Sister Mercy and help them defeat the giant. As for

[The Ancient Armor of the Kvaldir], the armor was to be brought to Scalawag Point when the ship was attacked by Forsaken. The Forsaken boarded the ship and killed everyone aboard, looting everything of value until a small army of undead Kvaldir appeared and murdered the Forsaken. The ghosts of Kvaldir quickly overran the ship and now guard the armor from further tampering.

All of these items can be retrieved, and the plan of the tuskarr was to simply return the artifacts to their proper resting places. After all, if the spirits were angry at the loss of the items, surely returning them would appease the ghosts and cease the attacks upon anyone who ventured to Shield Hill. But the results of their plan did not play out as expected as the offering came too late.

The theft triggered the reappearance of the Kvaldir along the coasts of Northrend, including those located in Borean Tundra. But the Kvaldir didn't start their vengeance with the tuskarr - they started with the naga, and the sheer scope of their planned revenge for the stolen goods was far larger than anyone could've imagined. A naga priestess in Riplash named Veehja tells that five hundred years ago Queen Azshara imprisoned a being named Leviroth in the waters below. Now the Kvaldir seek to undo our queen's work by sacrificing naga and later on tuskarr. The Kvaldir were trying to free the kraken and presumably use it on the naga of Riplash, or on the tuskarr of the coast, or possibly on any living things that happen to be standing in the way.

Far in the upper reaches of Northrend, north of the newly constructed Argent Tournament, lies the fishing village of Tualiq. This small tuskarr village was also attacked by the Kvaldir and was quickly overrun, the bodies of slain Tualiq villagers littering the icy beaches. Led by Drottinn Hrothgar, they recently took over a tuskarr village on an island off the northern coast of Icecrown and renamed it Hrothgar's Landing. It is now a mist-shrouded staging point from which they launch attacks against Silver Covenant and Sunreavers' ships in the waters between the island and Icecrown. The Kvaldir seem to have one motive in mind - to summon another kraken from the depths of the Northrend seas. Adventurers can kill the summoners that seek to use the kraken, and they can kill the kraken itself from above, riding hippogryphs and hurling spears at the attacking creature. Once again, the Kvaldir seem to be focused on using a kraken to obtain their vengeance.

Alleged "Kvaldir" attacked Cairne Bloodhoof and Horde forces when they were packing up to leave Warsong Hold, but these Kvaldir were actually just normal vrykul in costumes using the mist as a cover.[14]

The Kvaldir make an appearance in the Shimmering Expanse of Vashj'ir. They appear mainly in flashback quest chains beginning with

[81] Visions of the Past: The Invasion of Vashj'ir. They were led by a general known as Varkul the Unrelenting[15] and were fighting Queen Azshara's naga, who wanted the city of Vashj'ir but mostly the Crucible of Nazsharin from them.[16] In a series of quests in Vashj'ir, players take on the role of a naga battlemaiden who witnesses and helps with the summoning of Ozumat. However, the sunken city of Vashj'ir is being overrun by kvaldir, who seem intent on wiping the naga out entirely. During the battle, the Kvaldir managed to steal the artifact that was to be used for the summoning ritual of Ozumat. The naga battlemaiden has to retrieve the artifact so that Ozumat may be summoned and so the Kvaldir can be summarily wiped out. Some remnants of the kvaldir force can still be seen at Biel'aran Ridge.

With the entrance to Helheim located in Stormheim, the Kvaldir are extremely prevalent in the area, especially at Tideskorn Harbor.

After Helya is killed, the eternally cursed Kvaldir continue to be loyal to her and only answer to her voice. However, the Valarjar recovered Helya's horn and blow it to call on the Kvaldir and force them to obey.[1] The Valarjar use the Kvaldir against the Burning Legion on the Broken Shore.[17]

The tuskarr think they are the angered spirits of slain vrykul. They believe that the mists enable them to manifest.[18]

While mostly similar in appearance to vrykul, these creatures are covered in green scales, barnacles, and seaweed. The kvaldir typically reside deep in the ocean, where their corporeal forms would be crushed if their mistweaving magics didn't hold off the ravages of the depths. Although they remain flesh and blood in life, their deaths result in a backlash of mistweaving energies, quickly dissolving the kvaldir's body into mist. All that remains are patches of sea growth that had accumulated on their bodies and, of course, any loot they were carrying.[19]

Kvaldir skulls are as strong as rock.[20]

The rope that the kvaldir use is described as oily and coarse, quite unlike normal rope.[21] It may or may not be braided with hair.[22]

The following vrykul ghosts at Shield Hill in the Howling Fjord are also implied to be kvaldir:

Some kvaldir might be allies of Neptulon directly or indirectly, since their conquest of Vashj'ir hindered the naga from summoning their faceless one allies and their ability to overthrow the Tidehunter. The kvaldir refer to Neptulon by name in