For the monster or creature type, see Kyparite (mob) and Kyparite worm. 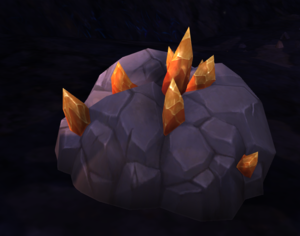 [Depleted-Kyparium Rocket], and also as currency for blacksmithing plans. Even though it is not an ore, Kyparite can be prospected.

Back when the world was still young, the first kypari trees bloomed. From the trees, the amber flowed and nurtured the mantid. This amber was called Kyparite by the mantid — the lifeblood of the earth. It healed their wounds and made them bold.[1] Amber is the cornerstone of mantid society. They use this material in their architecture, their art, and their technology. The Empress and her council of Klaxxi safeguards the great trees of Townlong Steppes as the only source of their precious amber.[2] When Kyparite is depleted of its amber essence it becomes fairly resistant to the corrosion from rocket fuel.[3]