The steadfast kyrian (sometimes pluralized as kyrians)[1][3] of Bastion are one of the Covenants in the Shadowlands. They are angelic soul guides[4] whose discipline and duty compels them to safeguard souls from the mortal realm as they pass into the Shadowlands.[2] They are messengers, couriers, and some of the purest souls in the realm of death.[5] 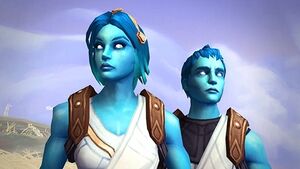 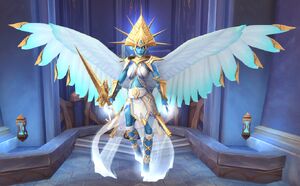 Archon Kyrestia the Firstborne is the first of the winged kyrian.

The kyrian are noble beings who shepherd mortal souls to Oribos when they enter the Shadowlands.[1] They are the forebears of the Val'kyr, the spirit healers, and more.[6] When Odyn gazed into the Shadowlands, he was inspired by the kyrian to create the Val'kyr. Conversely, Spirit Healers are true kyrian called Watchers whose role is to eternally evaluate souls. If the Watchers deem the soul ready, they will call forth a kyrian Bearer to come and bring their soul to the Shadowlands. If they aren't ready, the Watchers return them to life.[7]

The souls sent to Bastion by the Arbiter are ones that have been deemed noble enough[3] and who felt a calling to some form of service in life.[6] Souls who arrive in Bastion aren't immediately ready to assume their new duties as a kyrian but instead become wingless Kyrian Aspirants, who spend eons training, meditating, and reflecting on themselves through combat and other means to shed their burdens.[1][6] Anima-fueled automatons called Centurions are responsible for drilling Aspirants in meditative combat. As kyrian shed the burdens of their past lives, physical manifestations of their tormented thoughts are expelled from their bodies. The kyrian must strike these manifestations down in order to cleanse themselves and reach ascendance.[1]

The Aspirants who surpass their trials earn the honor of becoming one of the Ascended[1] and joining a higher calling beside Kyrestia the Firstborne, first among the kyrian.[3] At this point, they become ready for an eternity of service as a spirit healer, or one of a couple of other paths.[5][6] Rarely, an Aspirant will fail to complete a rite of passage and darken into one of the Forsworn, who wander the plains of Bastion to lament and can spread doubt like a disease if left unchecked.[1]

As souls plunge into the Maw and upheaval rocks the Shadowlands, scores of aspiring kyrian find themselves unable to continue their journey to ascension. Their numbers are now dwindling, and their duty to ferry souls to eternity is in jeopardy.[3]