L'ura is a darkened naaru and the last boss in the Seat of the Triumvirate. 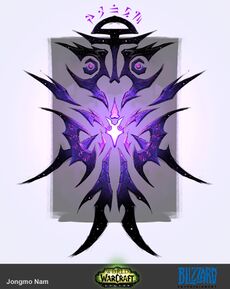 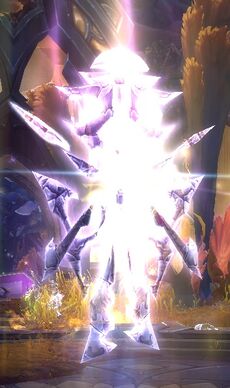 An echo of L'ura as she appeared during the draenei's exodus, before becoming corrupted.

When the draenei fled Argus aboard the Genedar, L'ura stayed behind to hold back the Burning Legion.[1] It was locked up by the eredar in the Seat of the Triumvirate on Kil'jaeden's orders,[2] and its imprisonment has since led it to fall into the rare Void state of the naaru lifecycle.

Recently, the Void ethereals of the Shadowguard were drawn to the Seat of the Triumvirate by the immense darkness emanating from L'ura in an attempt to claim it for their own.[3] However, they were defeated by adventurers accompanying Locus-Walker and Alleria Windrunner, who in turn attacked L'ura and siphoned her essence.

When Velen and his followers fled Argus aboard the Genedar, the naaru L'ura stayed behind to buy the draenei time to escape. Kil'jaeden, enraged by this betrayal, ordered the wounded naaru sealed away in the Seat of the Triumvirate. Over the long millennia that passed, L'ura fell from Light to Void. Her elegant song of courage and hope became a shadowy dirge of despair, luring those seeking to lay claim to her power.

L'ura begins the fight by open portals to the Void, calling in Greater Rift Wardens for defense. While the portals are open, L'ura channels Naaru's Lament, inflicting Shadow damage to all party members. Additionally, L'ura is immune to damage due to Darkened Shroud. Killing the Greater Rift Warden gives Alleria Windrunner the opportunity to close the portal, and use the void energy she receives to cast Dark Torrent. After opening two waves of portals, L'ura continues to to channel Naaru's Lament, but also engages the party directly, gaining new abilities.

Death
Cinematic plays.
Alleria siphons whatever remains of L'ura. The void energies surges at Alleria and she collapses. Getting back on her feet, she awakens with the new powers given to her.

Unused quotes
Alleria Windrunner: Such chaos... such anguish. I have never sensed anything like it before.
Locus-Walker: It is rare that a naaru falls into Void this way. The few cases I know of have occurred when mortals were involved. What fascinating implications...
Locus-Walker: Such musings can wait, though. This entity must die.
Alleria Windrunner: How did a being of the Light become a creature of Shadow?
Locus-Walker: The Void is a force of change... of transformation. Shadows are fluid, ever shifting.

Alleria Windrunner: I feel the fallen naaru's power. It beckons me.
Locus-Walker: You stand on the cusp of destiny, Alleria. There will be choices to make... and consequences to face.
Alleria Windrunner: Even defeated, the darkened naaru surges with power. I hear the shadows calling to me.

Locus-Walker: Claim its essence, Alleria Windrunner. Make its chaos your own.

While Archmage Y'mera does not know why the spirits of eredar linger in Mac'Aree,[4] a likely explanation is that L'ura is drawing them there like D'ore and K'ure drew spirits to Auchindoun and Oshu'gun, respectively.