From Wowpedia
(Redirected from LFR)
Jump to: navigation, search 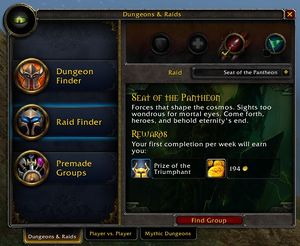 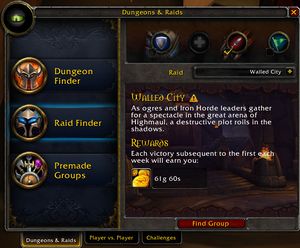 The Raid Finder interface in 6.0.2 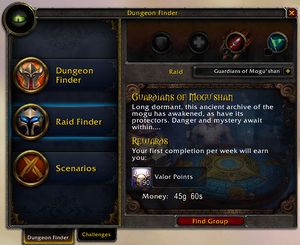 The Raid Finder interface as of 5.0.4 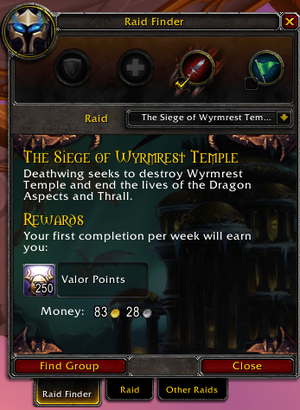 The previous Raid Finder interface in 4.3

Not to be confused with Raid Browser.

The Raid Finder (or “Looking For Raid”, commonly abbreviated as “LFR”), accessed through the Group Finder, is a tool that helps players find and join a random or specific raid instance with others. The feature was first released in patch 4.3.0 for Dragon Soul as a permanent addition to the raiding system, and has been included in all subsequent instanced raids.

The Raid Finder can be found in the Dungeons & Raids tab of the Group Finder, accessed through a button on the micro menu at the bottom of the user interface.

"Raid Finder" is also the difficulty level of any raid joined using the tool, and is only available using the tool. It is always in 25-player mode, and its difficulty is the lowest offered for any raid in which it is available. Raid Finder gear level falls between five-player heroics and the Normal raid mode on the same tier.[1] For the Siege of Orgrimmar in Mists of Pandaria, flexible difficulty was the next step above Raid Finder but this was removed in Warlords of Draenor.

Raid Finder eligibility is based on character level, average item level, and specific raid achievements. Generally, the first wing of a raid tier does not require any achievements, but subsequent wings (in the same raid instance or not) require the previous wing's achievement.

Players can use the Raid Finder to queue for the following raids:

The boss fights in a Raid Finder raid are simplified: their difficulty relative to normal and flexible is scaled down with the intent that they be manageable by randomly assembled, less organized pickup groups. Reduced boss health and damage compared to higher level modes in the same group size, as well as the removal or modification of specific mechanics that normally make the raid dependent on the performance of a single player.

A Raid Finder run is a gentle introduction to the bosses, and can be educational for a player who is new to, or still learning the fight. Some important differences in boss tactics exist between Raid Finder and Normal mode, and it is especially important to remain informed of this when or if you transition to Normal mode.

Each time a Raid Finder group wipes on a given boss, the Determination buff will be applied to the players which increases their health, damage dealt, and healing received by 5%, stacking up to 10 times, and dropping when the boss is killed.

Raid Finder uses a system called Personal Loot. When a boss is killed for the first time each week, every player has a fixed percentage chance of receiving a loot item. For each player, the game will decide whether the player will receive loot. If so, the game will then select a class- and spec-appropriate item from the boss's loot table and immediately deposit the item into the player's inventory. The specialization is the one the player is using at the time of the boss's death, and is not related to the role chosen by the player when queueing for the raid. All players who do not receive a loot item will instead be issued a bag of gold. All loot gained through this method is strictly Bind on Pickup and can not be traded with other players.

Bosses may only be looted once per week, though they can be run as often as desired.

Level 90 players can choose to use an

[Warforged Seal] (for Patch 5.4 bosses) for an additional roll on loot after every attempt. This bonus roll works just like the first roll does and will not affect in any way other players' loot.

A charm may also be used, on most bosses, for an additional roll even on subsequent kills during the same week. For example, a player may return to Lei Shi and kill her a second time, receiving no loot by default, but use a charm and get another chance. Notable exceptions include open world bosses and the final bosses of an instance, on which only one bonus roll may be used per week.

Queuing can done by forming a complete 25-man raid and initiating a queue request. You will then immediately be teleported to the raid.

You can also form an incomplete 25-man raid and queue, with additional members being chosen by the game to fill out the 25-man roster; all players will be teleported to the raid.

Since the Raid Finder is designed to serve players whose schedules do not permit regular raiding, it is designed to replace drop-outs. It is not possible to invite specific players to a Raid Finder raid once it has started (to prevent players from kicking pugged players to make room for friends).

There is no lock-out for Raid Finder in the traditional sense. You can queue in the Raid Finder repeatedly and defeat the same bosses over and over again. However, you are only entitled to a chance to receive loot from a boss the first time you kill that boss per weekly reset. If you kill the boss again later during the same weekly period, you are not eligible to receive any loot other than that from a charm bonus roll.

If you are chosen as a replacement for a partially-completed raid it is possible for you to complete that raid, then queue again later and try for loot for bosses that you had not personally defeated yet. When the raid reaches bosses you have defeated, you will not be eligible for loot. If you have completed bosses later in the progression schedule for a raid, the system will give you priority to join a group that will take on the bosses that you have missed.

If you leave a Raid Finder squad while they are in combat with a boss and that squad defeats the boss during that same battle, you will not receive loot but will still be marked as having defeated that boss, and will not be eligible for any more rewards from that boss until the weekly reset. Players who need to leave the keyboard in the middle of a fight may leave their characters in the raid to avoid being subject to this consequence.