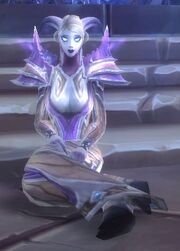 Lady Calindris (formerly known as Relic Keeper Calindris) is a high-ranking eredar priestess of the Burning Legion who wields the corrupted draenei staff known as T'uure, Beacon of the Naaru.

During the Legion's third invasion of Azeroth, Calindris is confronted and slain on Niskara by a holy priest seeking to claim the staff.

Long ago on Argus, before the eredar joined the Burning Legion, Calindris had acted as a caretaker of the eredar' holy relics, one of which was T'uure. She lived in Mac'Aree and an echo of her can still be found there, watching the jed'hin match at the Circle of Aspirants. She says she had a hand in picking the prize for the victor and thinks they will be very pleased.

It was her intimate knowledge of the draenei's holy magics that caused Kil'jaeden to bestow the beacon upon Calindris after the Battle of Shar'gel. After several years and a series of grim rituals, Calindris bent T'uure to her will and transformed the artifact into a dark reflection of itself. Instead of spreading hope, it would now spread fear, and where once the relic had healed, now it would cause wounds to fester.[1]

Calindris loathed the draenei and relished in the thought of befouling their cherished artifact. She grew so adept at wielding the corrupted staff that Kil'jaeden gave her a special task, assigning her as a torturer on the Legion's prison worlds. Calindris made an art out of inflicting suffering on her captives, and images of T'uure filled their nightmares. Eventually, Calindris received a vision of the future, much like the selfless draenei priestess who had once wielded the staff. She saw a vision of the Legion invading the world of Azeroth and bathing it in fel fire, but strangely, she herself was not there. T'uure, however, was. A stranger wielded the artifact in its true, uncorrupted form, and its Light blinded the Legion's forces, shining like a second sun as it had on Shar'gel.[1]

During the Legion's third invasion of Azeroth, a holy priest in search of T'uure traveled to Dalaran to heal a wounded draenei named Defender Barrem, who has mentioned T'uure in his delirious sleep. After cleansing his felcursed wounds, the priest and Vindicator Boros learn from Barrem that he was taken to a prison world and shared a cell with another draenei named Alora.[2] The two managed to escape through a portal back to Azeroth, but while Barrem managed to reach the safety of the water, Alora tripped and was dragged back. The priest and Boros travel to Darkstone Isle off the Broken Shore where they rescue Alora from a jailer,[3] after which she tells them of seeing a man'ari eredar carrying the darkened T'uure on the prison world. The conversation is interrupted as Subjugator Valith appears and attacks the three, but the demon hunter Jace Darkweaver suddenly leaps down from a nearby pillar and kills the inquisitor with the aid of Boros and the holy priest. Jace informs the priest that Alora's description perfectly matches that of Lady Calindris, but that the eredar is his prey and that he has been chasing her minions all over the Broken Isles for some time. Jace does, however, agree to assist Boros and the priest in killing Calindris, as he is after her soul, not her equipment.[4]

After stepping through the portal, the priest, Boros and Jace arrive in the hold of a Legion ship on the world of Niskara. As the three battle their way through the complex and free a troll mage named Bo'ja, Calindris notices their presence and sends Captain Naranoth to stop them. After defeating Naranoth, Bo'ja tells the party that Calindris is outside the ship, directing her demons to load up more captives, and that the mage has a score to settle with the eredar. The demon hunter, paladin, mage and priest confront Lady Calindris just outside the ship, but near the end of the fight she uses her dark magic to incapacitate Bo'ja, Jace and Boros, leaving only the priest to fight the demon. However, the darkened T'uure gradually begins to absorb the holy magic from the priest's spells, and after the priest sufficiently damages Calindris, T'uure escapes from her grasp and engulfs her in holy magic, which instantly kills her. As the priest picks up T'uure, their companions are freed from the eredar's magic, and Bo'ja opens up a portal back to Dalaran to allow the priest to return triumphant with the purified T'uure in hand.[5]

What is that noise? Naranoth! If you allow another jailbreak, I'll strand you on this pathetic rock and leave you to rot!

Aggro
Are you truly so stupid? You presume to challenge an eredar sorceress of the Burning Legion?

Shadow Strangle
I grow tired of this! Be consumed by the darkness!
It's just you and me now, little priest! Your pathetic Light won't save you!

Near death
No! My staff is absorbing the Light! Damn you, priest, and your accursed magic!

1% health
My staff... it senses the Light within you! What is it... Nooooo!
Calindris dies.