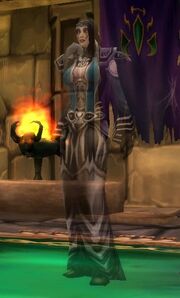 Lady Illucia Barov was a level 43 elite ghost mini-boss found in Scholomance. She was the wife of Lord Alexei Barov and formerly one of the six mini-bosses who had be killed in order to summon Darkmaster Gandling.

She uses only shadow spells, so a shadow resistance buff or aura will do great here.

Lady Illucia Barov has a chance to drop one of the following items. It is not guaranteed, however, that she will drop anything at all.

Illucia Barov's living form appears as a legendary Priest card in the Scholomance Academy expansion for Hearthstone. Her abilities switches both players' decks and hands for a turn, and her flavor text reads: ""…and that's how I ended up with a Murloc Cultural Studies major.""