Lady Sacrolash is one of the two Eredar Twins, a boss encounter in the Sunwell Plateau.

The eredar twins were two of the many demons summoned by Gul'dan in front of the Tomb of Sargeras to attack the forces of Azeroth in the climactic, disastrous battle at the Broken Shore.[2] They could be found guarding the Tomb alongside Brutallus.

The warlocks of the Black Harvest managed to submit the eredar twins to their will. The First used the Bloodstone, a powerful red-glowing gem that can break the will of any demon if fueled by enough blood. After slaying hundreds of demons near the Bloodstone, the gem had gorged on a ton of demon blood, enabling the First to use it on Lady Sacrolash and Grand Warlock Alythess after having forcefully summoned them, thus stealing one of the most powerful weapons in the dreadlord Mephistroth's arsenal, in addition to the Legion world, Dreadscar Rift, that they had already conquered. 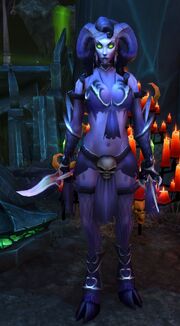 Lady Sacrolash in the Dreadscar Rift.