This article is about the in-game raid boss. For character biography and Warcraft III appearances, see Lady Vashj.

Lady Vashj <Coilfang Matron> is the final boss of Serpentshrine Cavern in Coilfang Reservoir. Phase 2 is a Battle for survival which tests the raids capability to function as a team, while phase 3 is a rather straightforward DPS race.

Lady Vashj can be damaged only in phases 1 and 3. During phase 2 lots of adds spawn, and her shield has to be switched off. Sporebat adds appear in phase 3.

Lady Vashj can be taunted.

Many of these elementals spawn continuously from the water at the foot of the stairs during phase 2.

Every 50 seconds, one Tainted Elemental spawns instead of an enchanted elemental.

Every 45 seconds one Coilfang Elite spawns in the area on top of the stairs.

Every 60 seconds one Coilfang Strider spawns on top of the stairs.

During phase 3, these bats spawn. At first they're few, but their number steadily increases.

The fight consists of three phases: Phase 1 and 3 are the same, except for the spore bat adds in phase 3. Phase 2 is the real test of a raid's ability to work together—every single raid member is important, and has ample opportunity to cause a wipe. 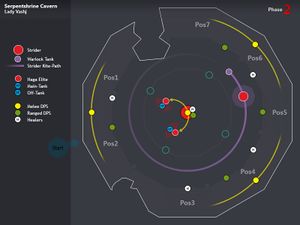 Positioning is all-important during phase 2. In phase 1 it's only important that the raid spreads out (to minimize damage from her Static Charge). Thus it's advisable to have everybody set up close to their phase 2 positions. The phase 2 positions are:

During phase 1, all healers should be in healing range of the MT.

[Misdirection] pull does the job. She hits rather hard, so the healers should pre-cast. This phase is rather easy, mainly a practice run for phase 3. The main goal is to keep everybody alive. The only problems are caused by her special attacks.

Static Charge victims must stay away from everybody else, and require some healing. If the MT gets it he moves to the middle and all other melee classes should stay away from him.

At 70%, Vashj runs to the middle of her platform and surrounds herself in a shield that makes her invulnerable. To take down the shield, the raid must deactivate the four Shield Generators around her by using a Tainted Core (from the Tainted Elementals) on each. Four different types of adds spawn during the entire second phase:

There is a brief 40-second lull at the start of phase 2, which allows everybody to get into position. There are 12 stairs; many raids divide them into four sections of 3 stairs each (N, W, S and E), and assign a team of two ranged damage dealers and one healer to each section. The enchanted elementals have rather low HP, and a single damage dealer can kill one easily before it reaches the Lady. Unfortunately they're frost immune, so frost mages must somewhat deviate from their standard practice.

The Coilfang Elites should be quickly grabbed by the tank, and moved to the inner circle. The melee group should kill each before the next one spawns.

Coilfang Striders need to be kited. The usual kite path is a wide circle outside the shield generators. Everyone with the ability to cast a DoT (including the healers) should all put DoTs on the strider whenever it comes in range. Kiting is facilitated by slowing the Strider as much as possible. All classes should use all means available (mages should spam slow, shamans use frost shock, CoEx from Warlocks, Paladins can Hammer it whenever it gets close, and Druids can use Root). Tailors should bring Netherweave Nets and use them liberally, however one must use care not to net a Strider next to a healer or tank (save applied to druids' roots). After patch 3.0.2 it's no longer required to kite them at all if you can get a druid to keep the strider rooted all the time.

When a Tainted Elemental spawns, it is imperative that it be killed as quickly as possible because it despawns after 20 seconds. If more than two despawn, a wipe is highly probable because the extra Elites and Striders are too much.

After the kill, the

[Tainted Core] must be looted. The looting player must then use it to deactivate a Shield Generator. Voice communication helps a lot in coordinating the handling of the cores.

The moment to switch off the last generator should be well-controlled, because the Striders and Coilfang Elites should be as low as possible when phase 3 starts. As a rule of thumb, there should be at most a half-dead Strider, a full Elite, and a nearly dead Elite left over at the start of phase 3 in order to prevent a wipe. It's safe to delay until about 10–12 seconds before the next Strider/Elite spawn. Don't wait longer because the Bigwigs timers can be somewhat inaccurate and the adds are actually "up" some time before they become visible.

This phase starts with a reset of the aggro table. It's basically Phase 1 with a twist - Spore Bats start to spawn. They come slowly at first, but gradually their number increases to the point where it becomes very hard to avoid the AoE poison. After about four minutes of Phase 3, raid members usually start dying from poison.

At first, all remaining phase 2 adds must be killed. During the first few minutes of Phase 3, a few hunters and warlocks can kill enough Spore Bats so that they don't cause a real problem. When too many Bats spawn, the Spore Bat killers should switch to Vashj. The top of the west stairs is a good position from which to kill the Spore Bats.

In effect, the Spore Bats are sort of an Enrage timer. Knowing how to avoid the poison patches, and having a skilled tank keeping her on the move can make quite a difference to the lethality of this "enrage".

For netting striders and notifying the current target of the strider (also works for the Pally stun, just replace /use with /cast Hammer of Justice):

To cast some spell (usually a DoT) on the Strider, this macro assumes that the kiter remains the same and the kiters name is known:

Similarly, the following can be used to heal the kiter without changing target. The [] treats the spell as a normal spell if the kiter is dead:

The following two macros do the same as those above, except for using focus instead of kiter name. In order to set the kiter as focus, use the macro while pressing <shift>.

The /stopmacro allows the macro to cast the DoT normally if there's no (or a dead) focus target.

As before, the [] allows the heal to cast as normal if the focus is dead.

This encounter can be soloed by a high-level and decently-well-geared player. Phase 1 (100%-70%) is straightforward: just open up and nuke her. She will go immune at any point after 70%, so push hard until she actually does so.

In Phase 2, when she runs to the center and gains her immunity shield, stay near the center to pick off the water elementals (they only have 4,000 HP!). Keep looking around the room for the tell-tale green missile appearing from down below, run in that direction and tap the Tainted Elemental to kill it. Loot the core, run to the nearest shield generator, and interact with it to disable it. Focus down the elites and the striders, as the Hamstring from the elite and the fear from the strider will get annoying very quickly. Don't forget to keep killing the streaming water elementals!

Phase 3 starts once the last shield generator is disabled. She will likely be at 50 stacks or more by this point, which is a 500% increase in damage dealt. That kind of damage will make a dent on level 90 players! Finish off any remaining striders and elites, then pull out all the stops to blow her down.

Intro
Water... is life. It has become a rare commodity here in Outland; a commodity that we alone shall control. We are the Highborne, and the time has come at last for us to retake our rightful place in the world!

Phase 2
The time is now! Leave none standing!

Phase 3
You may want to take cover.

3ioB vs Lady Vashj (Suramar - US)
Retrieved from "https://wow.gamepedia.com/index.php?title=Lady_Vashj_(tactics)&oldid=5717465"
Categories: