[Apocalypse] and charged with hunting down the renegade Guardian of Tirisfal, Aegwynn. The blade darkened his mind and caused him to commit many horrid acts, but after a battle with Aegwynn the spell was broken and Laith abandoned the blade in an unknown location. However, through a twist of fate, the blade would later be picked up by his son, Ariden, the leader of the Dark Riders. 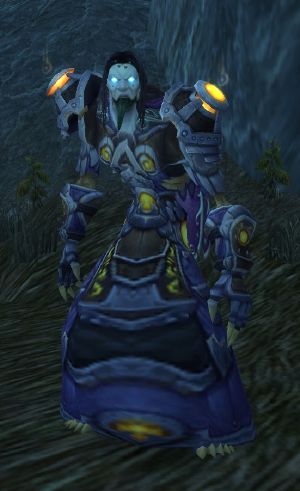 When the Guardian Aegwynn went rogue and severed her connections with the Council of Tirisfal, the council members created the Tirisgarde to hunt her down and capture her. Despite the Tirisgarde's use of powerful artifacts, Aegwynn outwitted her hunters at every turn, and so the Tirisgarde finally unearthed several closely guarded relics, one of which was the dreaded nathrezim blade

[Apocalypse]. These dangerous weapons were then distributed to the order's most loyal and gifted members, and Apocalypse was entrusted to Laith Sha'ol. From the very moment Laith held the sword, a darkness bloomed in his mind and would continue to fester until it consumed him entirely.[1]

While Apocalypse granted Laith great power, hatred began to taint his thoughts, and his desire to see Aegwynn brought to justice became a desire to see her dead. After narrowly missing his prey in the small human village of Corwell, he interrogated the inhabitants and accused them of conspiring with the renegade Guardian. Though the townsfolk knew nothing of Aegwynn's whereabouts, Apocalypse began to taint their minds and infect them with paranoia and suspicion. In a fit of rage, Laith cut down the town elder, which ignited a wave of violence throughout the village in which friends and family turned on each another with bare hands, teeth and anything else that could serve as a weapon. Only Laith walked out of Corwell alive.[1]

According to Royal Historian Archesonus' On Plagues, Curses, and Blights, there is an odd period of history where there was a noticeable increase of disease, famine, and violence. Some legends associate them with a nameless horseman who carried a sinister blade and in some tales rode a pale horse, in others a black mare with flaming eyes. Due to the famine, plagues, and death that followed in the horseman's wake, he was variously named as War, Death, Famine, and Pestilence. Archesonus, however, doubts these claims and believes the legend of the horseman to have simply been a way for the people of the time to cope with phenomena beyond their control.[1]

When Aegwynn learned of Laith Sha'ol and Apocalypse, she lured the Tirisgarde member into a trap, expecting to make short work of her adversary. However, she had underestimated Apocalypse's true strength, and Laith used the blade's vampiric power to drain the Guardian's lifeforce. None of Aegwynn's spells could shield her from the sword, but just as she was about to collapse she screamed a desperate incantation that shattered the connection between Laith and Apocalypse. In that moment, the darkness vanished from Laith's mind, and he remembered everything he had done while under the sword's influence. Overcome with horror, he dropped the sword where he stood and ran without ever looking back.[1]

Laith eventually settled in Stormwind City and started a family. He spent his days helping those in need as a way to atone for his past. His son Ariden, however, did not live such an altruistic life and spent his life traveling the lands of Stormwind with a group of dubious merchants, selling fake elixirs and artifacts to swindle innocent people of their gold. When the merchants attempted to sell their wares to the Guardian Medivh, he saw straight through their lies and cursed them to become his servants, forced to seek out lost artifacts and bring them to him: the Dark Riders. Ariden became the Dark Riders' leader, and due to his father's history with Apocalypse he felt unnaturally drawn to the blade, eventually rediscovering the blade in the Badlands.[1]

Years later, an unholy death knight traveled with Revil Kost to Deadwind Pass in search of Apocalypse. After finding mentions of "wet soil" and "shallow graves" in a journal at Ariden's Camp, the death knight began raising the corpses buried in a small graveyard in the shadow of the tower of Karazhan, eventually raising Laith Sha'ol himself. After defeating the Tirisgarde's reanimated corpse, Laith's spirit appeared and urged the death knight to delve into the Karazhan Catacombs to retrieve the sword and lift the curse.[2] In the deepest part of the catacomb, the death knight confronted and defeated Ariden, who now wielded Apocalypse. As the blade slipped from Ariden's grasp, Laith's spirit appeared and told him that Apocalypse's power had never been his and that the sword had wielded him as a weapon, rather than the other way around. Laith then told his son that the curse was now lifted and that he was finally free. As Ariden's lifeless body collapsed on the floor, Laith's spirit faded from view.[3] 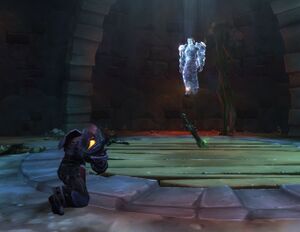