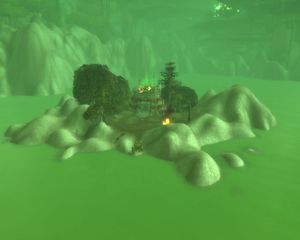 The island in Lake Dumont.

Lake Dumont is an extremely large lake with an island in northern Feralas, located just north of Dire Maul near the bordering Desolace and can be reached by foot at [55, -440] 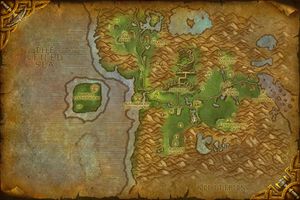 The island has a ruined mage tower that, judging from the fact it is still burning and the rubble scattered around, some at the bottom of the lake, was probably destroyed not too long ago. There is also a small boat in the lake.

The isle also houses several seemingly stranded NPCs. All the NPCs are Alliance, however they're friendly to Horde players.

The north end of the lake contains crumbled night elf ruins. On the shore by the ruins is a path into the mountains of Mulgore. Though the lake extends past the northern border of Feralas, it is still counted as part of Feralas in-game and not part of Desolace.

Some of the NPCs are busy doing different activities; Casey Fulton is sleeping above a rock, Brian Horn, Lucas Merino, Judah Mehler and Jonny Throop are watching the lake shore with some telescopes. Brandan and Som Vanderpool are dancing around a table; since they're a gnome and a dwarf and they bear the same surname, it's probable that they're married. Under a tree there's also a grave, which displays the name Ivan: interestingly, there does exist an NPC named Ivan in the Grizzly Hills, as well as a Lieutenant Dumont that sends Alliance adventurers to recover a stolen chest that belongs to Ivan's men. All the NPCs, except for the cats, are level 85.